My Uncle John served with the U.S. Army’s 349th Infantry. He fought in the Rome-Arno, No. Apennines, and Po Valley campaigns, and was awarded three bronze stars.

Of the four Flynn brothers, John was always acknowledged to be “the quiet one.” Perhaps it’s inevitable to become a boy of few words with two garrulous older brothers and two older sister. Uncle Joe told me that George (the oldest of the six Flynn children) used to tease John about his tendency to keep his thoughts close to the vest. “Some day John will work for the F.B.I.” George predicted.

No surprise, then that John—like so many others—rarely talked about his wartime experiences.

The incident he did like to describe was the time when, given a break from their battle positions, John and a buddy were resting along a nearby road smoking cigarettes when a jeep pulled up. It was General Mark Clark and his driver, “What’re you boys doing here?” was the General’s first question.  John’s buddy was apparently less of a talker than he was. There was silence for a couple of very long moments. Finally, “I had to be the one to answer,” John laughed. “Me, the one who never speaks up.” The General’s second question: “Which way to the front?”When he told this story, it was always clear—how it tickled John to remember how he had been the one to direct General Clark to the front line.

I heard Uncle John describe a battle scene only once: the misery, terror, and frustration of being pummeled by relentless artillery fire from Germans in a mountaintop monastery. When U.S. planes finally got the green light to bomb the monastery, the American soldiers, John among them, began cheering. This had to have been Monte Cassino.

When I was growing up, two stories about mail Uncle John received overseas were repeated so frequently that I cannot remember when I first heard them, or who the storyteller was.

First, the letter: Positioned along a battle line, in a trench, John was handed a letter from home. He wedged it between two rocks, saving it “for later.” No sooner he John taken his hand off the envelope than a rat scurried by, snatched it, and ran off. John’s precious letter: gone. He never even got to read it.

Second, the package from home: Grammy Flynn, with three sons serving overseas, was ever creative in putting together packages from home. One time, she decided to send John his favorite desert—a batch of cream puffs. Apparently, Grammy failed to imagine what condition these treats would be in when they finally reached her son. Ever after, the family joked that Grammy must have thought John could use her baked goods to kill the Germans.

When Saving Private Ryan came out, I asked Uncle John if he was going to see it. “No,” was his reply. “I already know what’s going to happen. The lieutenant is going to be killed.” He was referring Tom Hanks/Captain Miller whose image was the most prominent graphic on the movie poster. “The Germans always shot the officers first.” I understood: Uncle John had long ago had his fill of seeing officers shot. 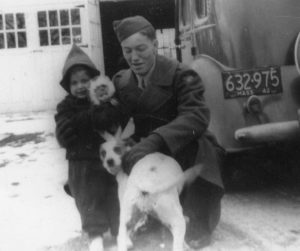 The few items related to John that I found among my mothers mementoes include a wartime newspaper clipping about her three brothers (I was surprised, when I read it, to learn that Uncle John once had lunch with President Roosevelt!).

There were also two photos. One was of John, taken while he was home on leave—before he was sent overseas. He’s in the driveway of Grammy’s house…with my sister and the family dog. 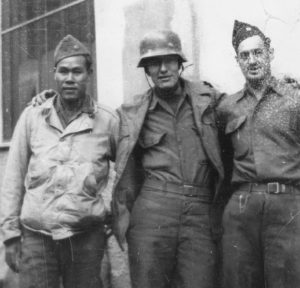 The other, obviously taken during a break in the fighting…somewhere in Italy… perhaps after a battle had been won—John with two other soldiers; it required a double take to realize John was wearing a German helmet.

My cousin, Maureen, John’s daughter, sent me a copy of her dad’s discharge document, which has enabled me to do some preliminary research. A quick Google search explains the German helmet. The nickname of John’s unit—the 349th Infantry—was “Kraut Killers.” Maureen also sent me a photo of a cap she found tucked away among her father’s things. When I posted a picture online, asking for help in identifying it, the consensus was that it was German (no surprise), likely SS.

Two of Uncle John’s war stories I know only because he told them to his sister, my mother, who years later told them to me.

The first: Uncle John’s squad was taking cover in an old stone building. He stepped outside to have a smoke. Within moments a shell landed; the building was destroyed; his buddies were dead. He was left alive, and alone.

The second: Huddled in a defensive position, John could clearly see a young German soldier looking at him across what must have been a very confined field of battle. “He was just a kid, like I was then.” A long pause. “I didn’t want to shoot.” Another long pause. “But I knew that if I didn’t kill him, he was going to kill me.”

Family legend has it (according to both Uncle Joe and my mother) that Uncle John drove the jeep that led victorious U.S. forces into Rome. I have my doubts that he drove the first jeep. But even the small amount of reading I’ve done so far confirms the fact that the 349th Infantry was the first American unit to enter the Eternal City after it was liberated. The Romans threw flowers.