Remembering someone I never knew

Remembering someone I never knew

In just a couple of weeks, we will be headed to London, Normandy, and Paris with the Victory in Europe sponsored by the Friends of the World War II Memorial. Each of us has been asked whether there is a particular World War II Veteran we wish to honor. There are several members of the Greatest Generation who have been very important to me over the years. But the one I am focused on, for this trip, is someone I have never met. 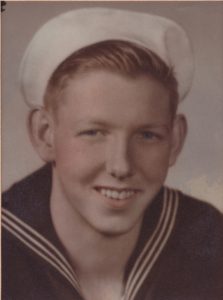 I grew up knowing that “Richie”—my Aunt Rosemary’s nephew—was killed in World War II, that she had been very close to him (just a few years older, so more like a big sister than an aunt), and that his death had been a devastating blow to the Bartels family.

I asked only once how he died. Aunt Rosemary said he had been killed driving a landing craft on D-Day. Just that brief mention of Richie’s fate made her so sad, I never brought up the topic again.

It wasn’t until I began reading and writing about World War II and networking with others doing the same that I learned what actually happened. Richie had not been killed “driving a landing craft on D-Day.” No. Richard John Bartels was a Machinists’ Mate 3rd Class aboard LST 523. The LST (Landing Ship Tank) was the workhorse of the invasion, bringing troops, as well as vehicles (tanks, trucks, jeeps, half-tracks), food, ammunition, and medical supplies to Normandy and ferrying the wounded, the dead, and even prisoners of war, back to England.

On June 19, 1944, the vessel’s third or fourth (accounts vary) round trip since D-Day, amid gale force winds and high seas, set to deliver 200 men of the Army’s 300th Combat Engineers, and a cargo of tanks and ammunition, LST 523 was third in a column waiting to unload on Utah Beach. But LST 27, just ahead, caught its anchor on submerged wreckage and could not proceed, so signaled 523 to go ahead. As LST 523 maneuvered to go around the immobilized vessel, “a tremendous explosion amidships broke her in two, lifting both sections of the hull high into the air.” The vessel had struck a German mine. Many were killed instantly. Those tossed into the icy sea or still below decks struggled to escape as the bow and stern sections began to take on water. Ninety-four men of the 300th Combat Engineers and 41 members of LST 523’s crew lost their lives that day. Among them was Aunt Rosemary’s newphew, Richie. 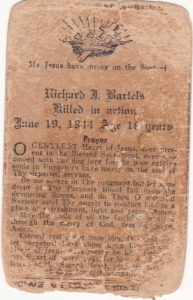 I still have the Mass card: “Richard J. Bartels – Killed in action – June 19, 1944, Age 18 years.” I found it in a packet of many that I often saw my devout aunt holding as she prayed; its ink is worn off in places, the corners rounded with wear. I also have the letters Richie wrote to Rosemary. I don’t know if I should have, but when she was clearing out her dresser, prior to moving to assisted living…Rosemary placed these in a small wastebasket amid other long saved mementoes. I plucked them out. I felt they were history and should be saved. The last letter Richie wrote is dated June 14, 1944, and is postmarked June 16, which means he mailed it during the time his ship was engaged in the D-Day landings, just three days before it sank—and he was lost. A couple of lines of that letter were cut out by censors. Perhaps he hinted at where he was, and what he had seen. Ironically, he mentions that he’s glad to be on 523: “Charlie can keep his little D.E. and I’ll keep this little tug I’m on. I think duty on these LSTs [is] a lot easier than on bigger ships.”

The day I learned that Richie’s name appears on the Wall of the Missing at the Normandy American Cemetery, I promised myself that for my Aunt Rosemary I would one day travel to Normandy and leave a flower or a memento of some kind at the place where Richie’s name is forever memorialized. I have recently come across my Aunt Rosemary’s card identifying her as a 1998 Charter Member of the World War II Memorial. I will leave this card with Richie. 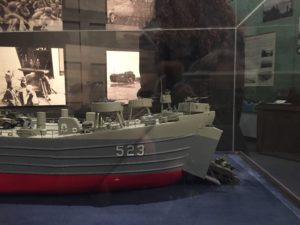 Footnote: In January of 2020, I was invited to make a presentation at the U.S. Navy Seabee Museum, Port Hueneme, California. I had already been to the Museum several times. The Museum’s D-Day exhibit has always been one of my favorites because it does such a good job of showing the incredible and largely unknown role of the Navy’s Construction Battalions, ferrying trucks, jeeps and heavy equipment to the beaches on pontoon barges as part of the First Wave, and once the beachhead was established, across artificial causeways assembled on the spot. The centerpiece of this exhibit is a scale model of an LST. Imagine my double take when the number on that model LST caught my eye: 5

On June 8th, we met our 32 fellow travelers and  set out on the Friends of the World War II Memorial’s “Victory in Europe” Tour led by Alex Kershaw. On Day 5, at the American Cemetery, Colville sur Mer, our tour leaders arranged for a ceremony to honor the memory of Richie Bartels.

Tour guide Michelle Dang, took me to the Visitor’s Center, and we spoke with a uniformed official who later met us at the Wall. In her hands a small bucket of damp sand–sand from the very beach where so many gave their lives and two small flags, furled. 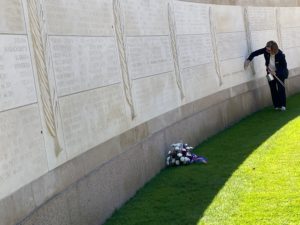 As she spread the sand over  etched numbers and letters, the entry began to stand out from all the rest: 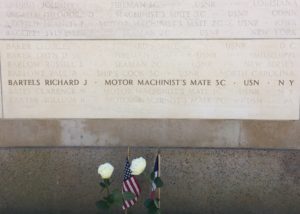 She then held up the two flags—the Tricolor and the Stars and Stripes—before setting them in the ground. She spoke of the gratitude of the French people for the sacrifice of Richie’s life and expressed condolences to his family for this heartbreaking loss.

Earlier, Holly Rotondi, Director of the World War II Memorial, had presented each of us with a white rose, which we were free to place at any of the markers in that vast and hauntingly beautiful place. John and I chose to leave our two roses with Richie.

As we did so, I was quite certain that my Aunt Rosemary, who surely had been reunited with her beloved nephew in Heaven, was smiling.