A big house, a big barn, and a big yard offer many opportunities for mischief—especially for two little girls, the youngest of six, who are only sixteen months apart. Thus Kathy and Karen seem to have caused my mother more gray hairs than all the rest of us combined (and let’s be honest, she was reaching the age when grays hairs were coming in fast and furious anyway). 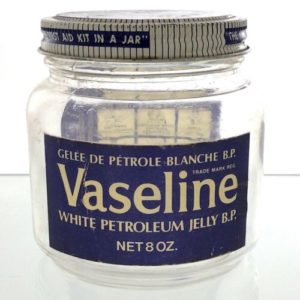 There was the time Karen was in the playpen in the front hall where “everyone” could easily keep an eye on her, and Kathy was toddling about, with “somebody” assigned to keep and eye on her. With all these eyes around, it’s a mystery how Kathy managed to get her hands on the jar of Vaseline from the changing table and… well, you can imagine the rest. Mary Anne was the first to discover them, and found the scene immensely funny. “You think it’s so funny, you try getting it off!” was the reaction of my exasperated mother. It took more than a few baths and shampooings to eliminate all vestiges of the greasy coatings all over “the girls.”

Kathy, as a toddler, was for sure a stealth operator. One time she managed to get halfway up Smith Road, nearly to the corner around which no one would have easily spotted her—stark naked. 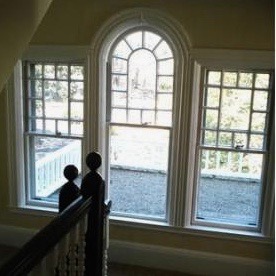 Another time she decided to climb out one of the windows on the stair landing (why was that window open, I have to wonder, and without a screen?). So there she was on the roof over the back porch, which wouldn’t have been so terrifying, except for the fact that the purely decorative railing was only about a foot high. She could easily have toppled over. Mary Anne was the one to climb out onto the roof and rescue her, with the rest of us standing on the landing, talking her away from the edge. 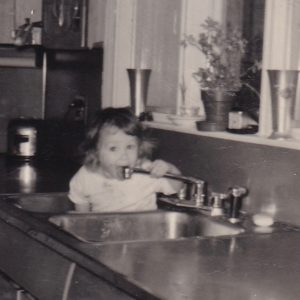 Karen, as the younger of the two little sisters, seemed to be less of a worry, but even she could climb. One time, my mother found her in the kitchen sink, her mouth on the faucet…attempting to get herself a drink of water!

When Karen was four, my mother left her with the boys while she went to the grocery store. By the time she got back, Karen had a broken arm. They had been playing football in the front hall. “It was only touch football,” David kept insisting

A week or two later, my mother and I were reading on the porch. A blood-curdling scream sent us racing down the driveway to the circle where the girls had been using empty glass jars to catch ants. “Don’t look! Don’t look!” Karen kept telling my mother. “I know it’s bad.” It was bad. She had sliced the baby finger on her left hand all the way to the bone. By the end of the day and for the next week or two, Karen had casts on both arms.

As the girls got older there were no more broken arms…but that doesn’t mean there were no more heart-stopping moments. One time my mother looked up from the kitchen sink and saw…in the middle distance… two little pairs of eyes looking back; the girls were peeking over the ridge of the barn roof.

Another time, from the same vantage point (she spent a lot of time at the kitchen sink), motion up over the dining room windows caught my mother eye. She froze in horror. An upside-down Kathy was waving at her. Karen was holding Kathy out the bedroom window by her feet!

“If you had ever dropped her,” my mother would say, every time this incident was recalled.
“I never would!” Karen had such confidence. (Or was it Kathy holding Karen; recollections differ. I suspect they did this more than once!)

Oh, that pair: Kathy and Karen. They were so notorious in family lore that when my daughter caught the younger two of her three girls getting into one bit of mischief after another she began to refer to them as “Kathy and Karen.” 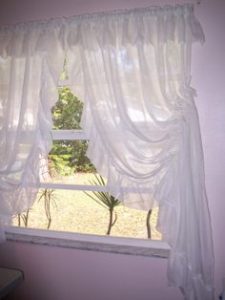 I don’t think I was involved when Kathy and Karen set the sheer ruffled curtains on fire in the bedroom over the den. (By then I was no longer living at home and this “oldest sister’s room” was Kathy’s.)

The fire apparently started in the wastebasket that happened to be positioned below the window. (Were they sneaking cigarettes? Had they  been playing with matches?)  It’s a lucky miracle that David (temporarily living at home, having come back from a stint away) walked by and heard one of them saying, “Don’t tell Mom!” He spied the smoke rising from the bottom edge of the curtain which was smoldering but not yet aflame, and was able to rip down the curtain, stuff it in the basket, and douse the potential conflagration before it got going—and burned down the house! 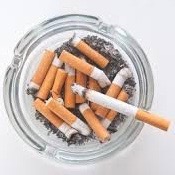 A less dangerous “fire” incident occurred when I (a young newlywed) was at the house for a visit. I strolled into Kathy’s room (my old bedroom) just to chat when I saw smoke rising from the top drawer of the night table by the bed.
“Kathy! Your night table is on fire!”
I rushed across the room, pulled open the drawer to reveal a large ashtray, well filled with butts, and a cigarette, recently lit, securely propped in the notch on the rim. I looked up at her. She looked back, a sheepish expression on her face. Neither of us said a word.

But rest assured, I scurried downstairs and chased down my mother.
“I just found a lit cigarette in Kathy’s night table drawer. Do you know those girls are smoking upstairs?!”
“I know it!”
“Well, aren’t you going to tell them they can’t?”
“Now wouldn’t I be a hypocrite to tell them they can’t smoke! I smoke. Your father smokes. If I let them know I know they’re smoking, I’ll end up having to give them permission to smoke. And they’ll be smoking all over the house, all the time. If they think they’re fooling me, and they’re just sneaking a cigarette here and there, they’ll smoke a lot less.”
I had to admire my mother’s logic on this topic. No surprise. Whenever presented with a conundrum, she usually managed to find a practical solution, grounded in common sense.

In retrospect, I’m not sure common prevailed when it came to climbing out on the roof of the front porch. It was the 1950s and early ‘60s. Back then getting a nice tan was the thing to do. (Skin cancer was unheard of.) And that roof turned out to be an ideal spot for spreading out a beach towel and lying in the sun. It was an easy climb out of any of the front bedroom windows.

In the wintertime, though, going out on that roof was a different story. And who would even think of doing so? Apparently, we all did!

A record-setting blizzard had dumped a massive amount of snow…after the plowman came there were snow banks along the driveway many feet high. Who knows whose idea it was to decide that jumping off the porch roof into the snow banks would be a lot of fun. I guess my parents decided this daredevil activity was unlikely to result in any injuries. Because not only did they allow it (this one-and-only time); my father even recorded the event on a home movie.