Now, more than half a century later, it is the telephone that my grandchildren want to hear about. “Nana, tell us about the telephones when you were a girl.” This is more or less the script…

When I was a girl, there was only one telephone in the house. There was no such thing as a cell phone. The telephone was black; the base was attached to the wall with a cord. The receiver—an easy-to grasp handle with a circular speaker for listening at the top and a matching round speaker for talking—was comfortable to hold and much bigger than a cell phone. It was attached to the base with a cord. And the base was attached by another cord to a small metal box on the wall, near the floor. So there was no walking around or going from room to room while you were talking.

There was special furniture—a telephone table and chair, where you would sit while talking on the phone. We had a small mahogany Queen Anne style telephone table with a single drawer in front, just the right size to hold two fat telephone books.

In addition to the residential phone book with numbers listed alphabetically, there was a second book called “The Yellow Pages.” And the pages really were yellow. Businesses paid for listings (and advertisements). Looking in the Yellow Pages was the  way to find stores, services, restaurants, recreational facilities, or professional people (doctors, dentists, lawyers, accountants) or trades people (plumbers, carpenters). There was no Internet. No Google. This was your source for local information. There was a slogan, “Find it fast–in the Yellow Pages.” And that’s what you did!

Two updated telephone books–the residential directory (White Pages) and the Yellow Pages–were delivered to every house that had a telephone (every house) once a year. These books were big. With hundreds of paper-thin pages that probably measured 9 x 12 inches, they were three or four inches thick and must have weighed at least four pounds each.

Back then I don’t think anybody had booster seats for toddlers. Once you were too big for the high chair, you sat in a regular kitchen or dining room chair, atop the two telephone books. As you grew taller, one of the books would be taken away. Eventually, you could sit on a chair without the books. And officially, you had become a “big kid.” 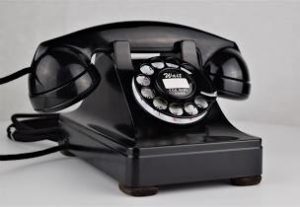 When we lived on Elm Street, we had a dial phone, so you could make your own calls by turning the dial, one number at a time. Put your finger in the hold that matched the number, turn the dial to the right until it stopped. In the center of the dial was a small square with that phone’s number on it. I still remember our number on Elm Street: BLuehills 8-3848. 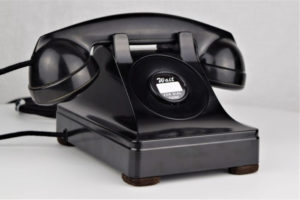 When we moved to Brush Hill Road, the phone had no dial. You had to pick up the receiver and wait. Soon and operator would say, “Number please?” And you would tell the operator the number you wanted to call. Sitting at a distant switchboard, she would connect your call. (My mother was a telephone operator before she was married, so we were all well versed in what the telephone operator’s job entailed. But that’s a story for another day.)

If the person you were calling was talking to someone else, you would get a busy signal “bah, bah, bah,” and you would say to yourself, “Oh, the line is busy; I’ll have to try again later.”

And if the person didn’t answer, you’d say to yourself, “Oh, no one’s home; I’ll have to try again later.”

It would be up to you, if you wanted to talk to someone, to keep trying. There was no leaving a message and expecting the person to call you back.

The little girls of the 21st century love this narrative; they think there’s something that sounds “better” about this old-fashioned system, and I agree! Because back then, the telephone was a convenience. It didn’t rule our lives. We weren’t obligated to carry our phones around with us and feel compelled to stay in communication with our friends, family, and workplaces 24/7. My granddaughters did ask what would happen if you had to call your mother. This question of course launched a lengthy description of pay phones. Now pay phones have gone the way of the dodo…just like telephone directories.

Back in the day, phone calls were expensive beyond your local area. Because we lived so close to Boston, in Milton, our local service was better than the service my Aunt Rosemary had in South Weymouth. It cost her a few cents a minute to call our house. But it cost my mother nothing to call her. Since the two of them chatted every day, Rosemary and my mother devised a system. Whenever Rosemary wanted to talk to my mother, she would call, let the phone ring once, and hang up. We all knew that was “the signal.” My mother would pick up the phone and call her back. Then, as now, being in touch is an important support system. For all of us.

My little sisters learned quite young how to use the telephone. Probably because on the daily calls to Rosemary my mother would often let the girls talk.

One day Kathy (then three years old) decided she wanted to talk to Rosemary. So she lifted the receiver and waited. When the operator, said, “Number, please?” Kathy knew just what to say: “EDgewater 5-3877.”

When the operator heard this very young voice, she paid no attention to what my sister was saying, “Little girl, get off the line. You shouldn’t be playing with the phone.”

“I’m not playing with the phone, I’m trying to call my Aunt Rosemary.”

Well, the operator would have none of this. She disconnected the line. And then called back, hoping an adult would answer.

Sure enough, my mother did answer. But when the operator began berating my mother for allowing her little girl to play with the phone, my mother was not happy.

“She knows how to use the phone. She knows the number. Please connect the child’s call.”

Tethered by the Telephone Cord

When we lived at Brush Hill Road, there was only one telephone in the house, and the telephone table and chair were at the base of the stairs in the front hall; if you were sitting in the chair, your back was to the front door. 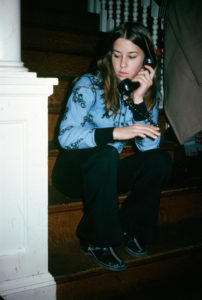 You didn’t have to sit in the chair, and we kids usually didn’t. The cord that attached the telephone to the wall was long enough that you could move around a bit. You could sit on the nearby stairs. Or even on the floor beside the telephone table (as we often preferred to do).

Kids back then were not any different from kids today. We all liked to talk to our friends. For a long time. And we did. But when we did so, we were right there in the front hall. I can remember being on the phone with my friend Joan; we usually had much to talk about. But sometimes we didn’t. But being on the phone was just a way to be together–even when we were in our separate houses. I can remember, sitting on the floor beside the telephone table for long stretches, the phone held in place by my shoulder (a lot easier with one of those old black phones than with any of the any of the newer models…or a cell phone!) playing solitaire while we talked. I think Joan might have been doing the same.

Sooner or later, someone would come along who wanted to use the phone, and so, “Get off the phone!” was a command heard not infrequently in our house.

When we first moved to Brush Hill Road, in those early years before we had a dial phone, we were on a party line. That meant we shared a line with another household. The telephone numbers were different; but only one of those households could use the phone at a time. So sometimes, one of us would pick up the phone and hear somebody talking. The rule was, you quietly placed the receiver back in its cradle. And the other people would do the same if they for us.

After a while, though, I discovered that our party line was shared with the home of a girl I knew. She rode on my school bus. She was a year older. I’ve never actually told anyone this before, because obviously, it wasn’t the right thing to do. But…sometimes…when I picked up the phone and heard voices…and recognized the voice of that older girl…I would put my hand over the mouthpiece…and listen. And what did I hear? To be honest, not much. In fact, I have a feeling that girl and her friend might I have been doing what Joan and I used to do…sitting there in relative silence playing cards. Because, what were they talking about? Nothing.

My most excruciating memory involving the telephone was a Saturday night when I was a senior in high school. I got home past the expected time. I walked in the door and there was my father sitting sideways in the telephone chair; he had turned to look at me; my was mother standing beside him:

“Where have you been?”

“I went to the movies with Joan.”

“We were just talking to Joan.”

Oops! I really wanted to an instant replay opportunity for that moment. I wanted to go right back out the door and come in again. But of course, I couldn’t.