When you were a kid in the 1950s, if you had to get some place or wanted to see your friends, you walked. Mothers did not drive their children around. For one thing, there was usually only one car in a family, and often the father took that car to work.

From 376, there were four key destinations within a mile’s walk.

…was the anchor store (only store) in a triangular red brick Victorian on the wedge of land where Blue Hill Avenue met Blue Hills Parkway. There, you could get an ice cream soda or a root beer float for 35 cents, or buy a movie magazine, or flirt with the soda jerks, one of whom was my brother David, so that was not an option for me. (However, I did like to talk to the other, even older boy who worked at the pharmacy: John Cunningham.) 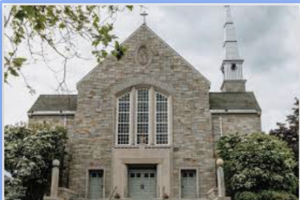 Saint Mary of the Hills. We would walk there from school one afternoon a week for Catechism. I don’t know why religious instruction was called Catechism, except for the fact that the name of the book full of questions and the answers we were required to memorize was called The Baltimore Catechism. We also were sometimes sent to church on Saturdays for Confession. If you were Catholic, your mother made sure you had gone to Confession…I don’t recall how frequently. Perhaps it was only in the days just before Christmas and Easter. Because, let’s face it, on those holidays, you certainly wouldn’t want to be the only one sitting in your pew making it obvious you weren’t officially “sin-free” when everyone else  church was marching up the aisle to receive Holy Communion.

At 133 Brook Road, this was the nearest grocery store within walking distance, and occasionally my mother would send one of us there to purchase an item needed for supper (most likely a pound of hamburger, as “the Food Mart” had an excellent butcher shop). My mother drove to the Stop & Shop in Hyde Park for her weekly “order,” but never bought meat there. Our meat was delivered once a month from Kinnealey Brothers, who, except for golfing buddies like my father, sold only to restaurants. The Food Mart was also the place to stop on the way home from Catechism. I was always given a dime to spend on those days. Would  I choose two 5- cent items (a Welch’s fudge bar and a box of Canada mints) or one package of Hostess Cupcakes? Always a dilemma.

In Mattapan Square, you could find just about anything. Most important for us kids, we had the Oriental Theater (35c for a matinee) and Brigham’s nearly next door (35c for a hot fudge Sundae), the 5 & 10 /Woolworth’s (for small notebooks, pencils, LePages glue, envelopes of canceled stamps for the stamp collecting books that all kids seemed to have, comic books, hair clips, you name it!), the Smile-a-While Gift Shop (greeting cards, that cost at most 25 cents; Hummels, and other little gewgaws), a Jewish Deli, Karen’s Buttercup Donut (good places to sit with your friends for a lunch–or just a donut), Carroll Cut-Rate (discount cosmetics—the place to go to buy your mother a bottle of Evening in Paris for her birthday), a pet shop (for new or replacement tropical fish and fish food) just a short way up River Street towards the east  And up River Street towards the west, a hobby shop where David would buy airplane model kits and Duco cement.

Aside from these few places, if we left the house it was usually for meeting up with friends. And now that I look back, much of our “friend” time was taken up walking to meet each other, or walking to our destination–usually, another friend’s house, the nearest bus stop==or just walking around aimlessly and talking. We were definitely what today they call “free-range kids”–out the door and on our own.

I can remember walking with Lora Marcellino the length of Brush Hill Road all the way to Paul’s Bridge in Hyde Park (nearly two miles), and from there back along Truman Parkway to the point where it meets Brush Hill Road, then back up the hill to home, a hike of nearly five miles…for no particular reason except to walk and talk. (And now that I think of it, nobody carried water bottles back then. How long did that walk take on a summer afternoon? And didn’t we get thirsty?)

“The Lions at Loews” was the designated halfway point for my best friend, Joan  K, and me when we were walking to meet each other. Joan lived at the bottom of Vose Hill Road. From Joan’s house, we might cross Blue Hill Avenue and cut through the grounds of an abandoned and massive old mansion which is now the home to Delphi Academy–our “shortcut” to Robbins Street. When we were in Junior High School, if we stayed late…for cheerleading practice…Joan and I would walk home from Pierce (which was then on Gile Road); this gave us the opportunity to explore the new neighborhood being built on Sumner Street. As high schoolers, on summer evenings, we’d often meet up and walk to the Town Field, stopping at White’s Store for a Creamsicle along the way. More than once, we walked all the way to Cunningham Park–nearly four miles away. The advantage to teenagers not having a car, to meet up with friends–or to find the boys–required a lot of time walking!

Despite the fact that you’d inevitably end up pushing your bike back up the hill, I sometimes coasted down Brush Hill Road on two wheels, because biking was always faster than walking. I guess if we had lived at the bottom of the hill, I would have hopped on my bike more frequently.

For a faster way to cover a few miles, there was always “the bus.” 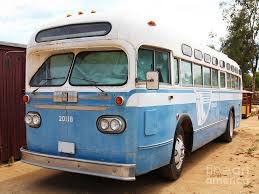 I could walk to the end of Valentine Road and wait for the Parkway West, which came every thirty minutes (at ten past and twenty of the hour). Joan would walk from her house to the corner of Blue Hill Avenue and Robbins Street and catch the same bus. (We planned ahead of course.) From there we might get off at the bottom of Robbins Street, on Canton Avenue, and walk to our friend Susan’s house. Or we could stay on the bus, get off at the corner of Canton Avenue and Highland Street, just before the bus turned down Thatcher Street and walk farther along Canton Avenue to the Library–or cross the street, and backtrack to Joan B’s house at corner of Canton Avenue and Wendell Park . We could get off at Thatcher Street and Warren Avenue if we were headed to Cheryl’s house. Or stay on the bus to the end of the line, where it pulled into the station at Mattapan and go “in town.”

The  Parkway West made circuits from Mattapan Square along the main streets in the west sections of town and back again to “the Square.” (But from Brush Hill Road, getting directly to the Square, just a little over a mile away, was quicker to walk.) The Parkway East had a similar circuit to the other side of town. I don’t think I ever rode the Parkway East! 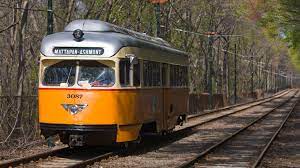 The trolley station in Mattapan was  just off River Street, beyond the flower shop next to the river. (In earlier years, trolley traffic was so frequent and so busy that there was a depot on the wedge of land between River Street and road that buses used to enter (and leave) the station; that building as we knew it was a barber shop–complete with red, white, and blue spinning pole–but it definitely had the curved, overhanging roofline of a train station. The MBTA fare was a nickel, which we dropped in the fare box when we hopped on the trolley (there was always one waiting). Older trolley cars, I remember, had seats made of wooden slats. (But those antique conveyances gradually disappeared) The Mattapan-to- Ashmont line, we’d been told, was the only trolley line in the world that traveled right through a cemetery (Cedar Grove in Dorchester). At Ashmont, we got off the trolley and boarded the subway train (no additional charge). The train went all the way to Harvard Square. But we got off at Washington Street, and underground world of newsstands, shoe shine chairs, eateries (the White Castle and others) and direct entrances to department store basements–most notably the legendary Filene’s Automatic Bargain Basement.

We’d always head directly to the wooden escalator up to Hawley Street, then walk around the corner to the Winter Streets where, at the intersection with Washington Street (today’s Downtown Crossing), we had the choice of entering Filene’s or Jordan Marsh.

We never shopped in Gilchrist, the third big store on that iconic corner; it wasn’t quite as “upscale” as the other two. (However, I had fond memories of Gilchrist’s for my father used to work there and on holidays when there was going to be a parade –Memorial  and Veterans Days–he would take me to work with him so I could watch from a corner window overlooking the spectacle.)

The big clock at Filene’s was always the place to meet if you were arriving separately (or got separated while shopping).

Joan and I shopped together a lot. Joan had her mother’s charge cards. I usually had only my babysitting money to spend. I remember buying a very pretty blouse, white with sprigs of flowers on it. Back then, a new blouse would come neatly folded, the collar protected from wrinkling by a thin cardboard liner, with countless straight pins holding the folded corners secure, and buttoned front, collar and cuffs in place.

After making our purchases, Joan and I would go to the main floor of one (or both) stores and browse around. We’d try on hats, gawk at jewelry, or test perfume fragrances on our wrists.

Our shopping done, we’d sometimes stop by her father’s restaurant, the Old Arch Inn on Arch Street. (However, if I was with any other friend, we would go to the Coldstone Restaurant on Hawley Street, a cafeteria that was much more affordable–and served excellent frappes.

Back to the Future?

These days, when we make plans for getting where we need or want to go, we don’t usually think first of walking…or catching a bus, train or trolley…or hopping on a bike. But it’s truly time to get serious about alternatives our cars.

Imagine this: What  if you could walk to the end of your street, hop on a modern-day version of the Parkway West–an electric vehicle that circled local routes frequently and dropped you within a short walk of where you needed to go?

Looks to me as though at this point it’s either back to the future…or just keep driving…I until we find ourselves sailing over a cliff–like Thelma and Louise.