A Not-Quite-Empty Mansion Just Down the Road

A Not-Quite-Empty Mansion Just Down the Road

Ann J lived at corner of Brush Hill Road and Fairmount Avenue. What a place! “The Brown Estate.” (Who were these Browns? I never knew.) The house was not visible from the end of the gravel driveway, where the gardener’s house stood guard. So I’d go crunching down the gravel driveway past carriage house, very different from our “barn”–at least four sets of double doors, behind which, I presume, one lived a carriage (or perhaps a limousine). There was a huge gravel square that could only have been intended for parking vehicles in front of the house, which was too big, really, to be called a house. This, surely, was a mansion. Faced with stucco (if I remember correctly through the cloud of time), I believe the style, square and symmetrical would be called Georgian.

It sat amidst four acres of formal gardens (thus the presence of William Williamson, the live-in gardener) on the property.

Visits to that incredible place were always an adventure. I always entered through the back door (of course) at the side of the house; where there was a laundry yard shielded from view by trellis-work.

Not Your Average 1950s Household

Ann’s mother was the caretaker; so Ann, her mother, and her brother, had bedrooms on the third floor. They used the house’s dining room, with its big windows and beautiful wood paneling (painted white) as their living room. And of course had full use of the huge kitchen with its giant gas range (I suppose there must have been a butler’s pantry and larder, but I can’t retrieve them from memory).

Ann’s mother was the only parent I ever knew, growing up, who was divorced. Unfortunately, having divorced parents made Ann and her brother, Donald, somehow “different,” in some vague, unspoken way, from all the rest of us in elementary school. The reason the Johnsons lived on the property was that the Brown Estate was for sale. But it remained on sale for years. The asking price ($60,000) put it beyond the reach of any ordinary purchaser. The Johnsons lived there throughout our elementary school years…until the place was finally sold when we were in Junior High School, and they moved to Brookline (another care taking job for Ann’s mother? we never knew) and disappeared from our lives.

To get to Ann’s room, we went up the back stairs from the kitchen and past a glass case with stuffed birds on the wall in the second-floor hallway (a bit creepy). The door to the third floor stairway was hidden behind a doorway. We opened the door, and up we went.

The third floor rooms were comfortable and spacious, but, obviously, not as grand as the rooms downstairs. The greatest attraction, for me, was Ann’s doll collection (I don’t recall ever having a doll collection) and the doll tea parties she hosted.

Another indoor activity that took place in the downstairs “living room” was making paper dolls. (I’m thinking Ann’s mother might have been the inspiration for this all-day project.) Undertaking this activity required, first  a walk (hike) all the way down Fairmount Avenue to Hyde Park Square (about a mile each way…downhill, going, uphill back) to “the 5 and 10” (Woolworth’s). There, we would ask for one of the out-of-date sewing pattern catalogs, which apparently, were given away for free. (Those truly were “the olden days”!) Back at Ann’s the pattern books, with their detailed illustrations would provide the the extensive paper-doll wardrobes that we snipped out with enthusiasm.

Not Your Average 1950s House 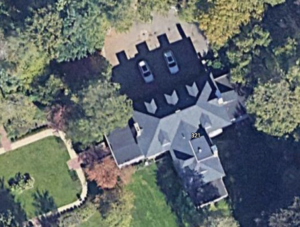 I just clicked around online hoping for a glimpse of the house. But there are no photos available for the address, so an aerial view from Google maps will have to suffice. Unfortunately, the front section of the roof with its three dormers seems to blend with the shadow over the “parking lot” out front. where two cars are parked. Once your eyes adjust to that fact, you can see that the place is massive. According to Zillow, the house  has 6,156 square feet of living space, including seven bedrooms, and four bathrooms. I would have guessed a few more bathrooms.

Because every once in a while, Ann and I went walking through all the rooms (still furnished, although the upholstered pieces were shrouded in dust covers). My impression was that every bedroom had its own spacious bathroom and that the bathrooms had marble walls. But perhaps a couple of those rooms actually shared a bathroom, as there had to have been at least one on the third floor. (And a powder room downstairs? I don’t remember one, so maybe not.)

We always used the back stairs. But downstairs we did venture into the front of the house, where the massive staircase with a gorgeously carved mahogany balustrade led to a balcony that overlooked the hallway below.

On the far side of the front hall (to the right if you entered through the front door), a library paneled in honey colored wood, its shelves crammed with leather bound books. One day, Ann was extremely secretive as we tiptoed in there; she opened a lower cabinet door to show me what she had discovered. She carefully lifted out a heavy wooden case and lifted the lid to reveal…a pair of dueling pistols. Just gazing at them frightened us both, and they were quickly stashed back into their hiding place.

Directly behind the front hall, a high-ceilinged drawing room hung with tapestries; and behind that, an equally spacious conservatory–glass walls, an intricate system of fabric shades on rollers (frozen in place just as the entire house was)  a now-dry fountain, wrought iron furniture and empty plant stands.

The basement offered a very different kind of exploring (and excitement); at least once, Ann’s younger brother took us for rides amongst stone corridors and overhead pipes on his Radio Flyer wagon.

Not Your Average 1950s Yard

Outside, there were so many discrete areas that it was a puzzle to know whether you had actually seen them all. Gardens laid out in formal patterns separated by tall hedges, and in between them at the ends of various walkways, small pavilions made of cedar (similar to the trellis at the end of our front walk at 376). Amongst these formal spaces, one, very different, held and a huge oval swimming pool–empty except for an accumulation of dried leaves.

Easiest to find (no challenge at all) was the rose garden along the driveway, just across from Mr. Williamson’s house. The roses were planted in rows–like a vegetable garden. And when they bloomed, they were spectacular. My theory: this was the cutting garden for providing vases of roses throughout the house.

Years after our family moved from Brush Hill Road (in the late 1980s or early 1990s), Mr. Penfire and I met the couple who currently owned the house at 321 Fairmount Avenue (all 6,156 square feet of it)—-an architect and his wife, who had two (I think) young children. By then the original Estate had been subdivided; Mr. Williamson was long gone, his house, updated, perhaps enlarged, and now a separate property. A strange boxy house that looked like a medieval chapel in front, an Italian villa in back stood on an acre at the Brush Hill Road/Fairmount Avenue corner.

I was invited by the young wife to stop by to see the place in its current iteration. The house turned out to be  much smaller than I had remembered (although still huge, of course). The third floor–former home of the Johnsons–had been converted to a rental apartment. But the young family did not stay long. I soon heard they had moved to Provo, Utah, so the husband could help Robert Redford develop the Sundance Resort.