Tuesday, I decided to think seriously about trolls. And trolling.

It was an op-ed in the morning newspaper that inspired me: “How Russia trolls the 2020 U.S. vote.” 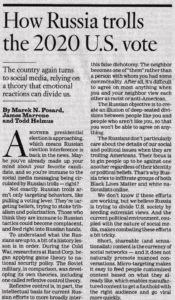 What are the Russians up to? I’ve been wondering about this since all the brouhaha just prior to the 2016 election. To be honest I’ve been skeptical. Short of tampering with ballot boxes, or voting machines, or computerized vote tallies (one more argument against online voting; let’s have a paper trail), how can the Russians actually do anything to affect the outcome of our elections?

Well, after reading that piece on Tuesday, (I think) I get it!

It’s not just about influencing the election. It’s about influencing the electorate. And it’s not so much about influencing as manipulating. If you’re like me, no doubt you’re sitting there saying to yourself. No way! The Russians can’t influence how I think. Or what I think. Are you sure?The authors of the op-ed are a military sociologist, an economist and a behavioral scientist at Rand Corporation, a nonpartisan, non-profit think tank. Its goal is to help improve policy and decision making through research and analysis, to disseminate its findings as widely as possible to benefit the public good. (Ranked “Pro-Science, Least biased and High for factual reporting” on the website mediabiasfactcheck.com)

Here’s what the authors want us to know 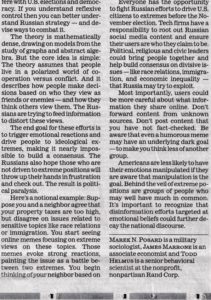 Russians aren’t just “targeting behaviors, like pulling a voting lever.” They are “trying to stoke tribalism and polarization.” What they’re doing is based on the theory that people see the world as unalterably bifurcated—friends on the one side, enemies on the other. This theory holds that each of us makes decisions and take action based on how we view others. With friends, we willingly cooperate. With enemies, we’re ready for a fight.

So what is the Russian game plan? “To trigger emotional reactions that drive people to ideological extremes.” Those who cling to the extremes, their theory goes, make consensus impossible. Those who strive for consensus get exasperated and give up. The result: political paralysis.

“The Russian objective is to create an illusion of deep-seated divisions.” They want us all to see ourselves on one side or the other of an unbridgeable chasm. We disagree on a few key issues. So of course we each decide we can’t agree on anything. And we stop trying. Think about it, every time you stop talking to a friend (or relative) because of political differences, the Russians win.

“[They] don’t particularly care about the details.” Their goal is for great swaths of our population to despise each other. And I’d say they’re doing a pretty good job. And we’re all helping!
So what exactly are the Russians doing? They’re trolling.

I have to be honest, I’ve heard the term a million times, but I was never quite clear on what trolling actually is.

In this new connotation the verb troll defines an all-new kind of activity that takes place not in a boat but on a computer. (And those who indulge in this activity are not regarded as benign fishermen… or women… but as beings more akin to the trolls of Norse mythology.)

The website Life in Norway describes two kinds of creatures. Forest or mountain trolls are large brutish creatures, whereas cave trolls are smaller than humans with rounded bellies and stubby arms and legs. Large or small, both are “not generally friendly to humans,” as well as being both stupid and dangerous. Their goal, apparently, is to “baffle and deceive.”

Time to circle back to the Russians…

…and our op-ed authors, who believe that Russia is trying to divide U.S. society by intensifying and encouraging extremist views. They do this by planting on social media short, sensational content that’s easy to share—with just a click! Let’s face it: social networks do not lend themselves to nuanced conversations.

Micro-targeting makes it easy for Russian trolls to deliver customized content based on what they know a person already likes. The hope is to get a foothold their targets by providing powerful visuals with punchy taglines and to have those messages go viral.

There’s so much going on right now that the Russians can easily exploit: race relations, immigration, economic inequality, violence in our cities, the handling of the pandemic. The list is endless.

The Russians hope to set us against each other by encouraging us all to adopt extreme and inflexible views on every issue. To stubbornly congregate in opposing camps.

Are we really as divided as we think we are?

The irony, of course, is that all of us actually agree on every issue. When you think about it. We all want racial harmony, secure borders, prosperity, tranquility, and good health from sea to shining sea. Don’t we? Unfortunately, of course, we all have different ideas of how these idealistic visions can be made real. Or whether striving to achieve such a heaven-on-earth kind of society is the least bit doable. Or worth the effort. And so we argue.

Arguing can be very productive. If we make an effort to listen to one another.

Yelling at each other, though? No. Name calling? Treating each other with contempt? Counterproductive. Destructive. A surefire way of getting stuck. And staying stuck.

And this, of course, is what Russia would like to see: Political paralysis. And it’s pretty much what we have, here in the United States today.

If we can’t make it better, let’s at least not make it worse 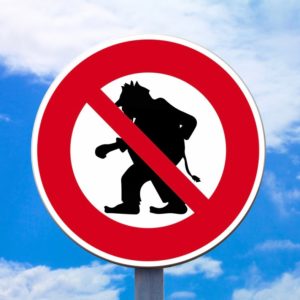 Let’s get rid of the trolls. Let’s shut the Russians out of the conversation. In fact, to shut out anybody who’s simply yelling.

How to do that? My op-ed authors advise:

• Be careful about what information you share online.
• Don’t forward content from unknown sources.
• Don’t post content you haven’t fact checked.
• Be aware that even a humorous meme* may have an underlying dark goal.

*Meme: “a humorous image, video, piece of text, etc., that is copied (often with slight variations) and spread rapidly by Internet users.

My op-ed authors report that “Russia tries to infiltrate supporters of both Black Lives Matter and white nationalists online.” Many of the memes you see are planted by the Russians (or others) with the sole purpose of just stirring up trouble. Before you share a post, click back to see where it originated. A real person? A real organization? Maybe not.

Social media can be a delight

It’s fun to see what friends are up to. It’s enjoyable to find out more about topics of interest. It’s a joy to discover new people, places, topics to explore. It’s rewarding to make connections with strangers who have common interests.

But social media can also be distressing and depressing. And disturbing.

Political discourse is a minefield these days.

Many of us have become so emotional about so many topics that we are having trouble conversing with those whose opinions and viewpoints differ from our own.

Every time we take the bait that those trolls are setting out for us, we help them make things worse instead of better.

Don’t make the problem worse. Be part of the solution.