In 1984, the nest was somewhat empty (A recent college grad camped out on the third floor is not a child who needs driving around or taking care of—and is actually pretty nice to have around.) And I was cutting back on freelance work. So the pages of my calendars were a lot emptier than in 1984. I nearly always noted what I had made for dinner—probably because I was having fun trying new recipes—and the movies Mr. P and I often watched together on TV in the evenings (no more retreating to my office after dinner because I had to meet a deadline.

But our care giving days were not over. We had simply made the transition from taking care of children to taking care of old people. By January of 2005, we had lost my Aunt Rosemary (non-Hodgkins lymphoma) and my mother (congestive heart failure) but still had my wonderful Uncle Joe with us, holding his own at Allerton House, the assisted living residence he and Rosemary had moved to in 2001.

Joe would be 90 in March—and so we shouldn’t have been surprised that 2005 began with a harbinger of things to come. My entry for January 3: “Uncle Joe to Emergency Room.”

When you live in an assisted living residence and you fall, you’re off to the Emergency Room, no matter what. The January 3 incident involved no complications, so likely I took Joe home the same day or the next. From then on, as I page through that 2005 calendar I see that Joe fell and was shipped off to the ER again on February 13. Again, it was a revolving door visit. 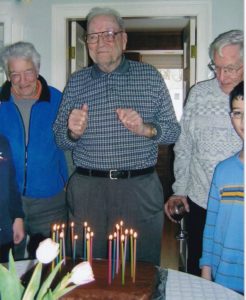 On March 10, Joe turned 90. The Sunday before, Mr. P and I hosted a family celebration at our house. Joe’s two younger brothers were there, along with their children and grandchildren, our Jellybean (Lulu was living across the country at the time); my sisters, and their kids. We all adored Joe. Everybody had a great time, especially the three brothers, all widowers, all well looked after by the younger generation. We loved getting them together–always there would be the same gifts for the three of them (scratch tickets!). We called them “the three amigos.”

as the weeks rolled by

Luckily for the rest of the year, there were no more trips to the hospital for Joe. But there was at least one entry a week that said simply, “check on Joe” or “visit Joe.” In addition, there were multiple entries that mention taking Joe to lunch… to the bank… to a store… his see his investment advisor…or to any one of several doctors’ appointments—primary care/cardiologist, eye doctor, dermatologist, gastroenterologist, orthopedist. And occasionally, a notation of an excursion that was a favorite for all three of us (Joe, Mr. P and me): “Took Joe for ice cream.”

Checking on Joe involved a twenty-minute drive to Allerton House, where I would set up his pillbox for the week and write a check or two (or none). He would show me his calendar for the week ahead (Joe made a point in participating in every activity and excursion Allerton House offered (except the ladies’ crafts of course). And after that, Joe, Mr. P, and I would just sit and chat for a while.

When we arrived, Joe would inevitably be busy. If we went on weeknights he’d be playing cards with three ladies. On Sunday afternoons, he’d be at the table in the library just outside his apartment, working on a jigsaw puzzle with his buddy, Ruth. Like Joe, Ruth had moved to Allerton House with her spouse and then been widowed. She was a no-nonsense mother of six. “Not gossipy,” Joe reported. (He said he always turned down his hearing aid volume when the ladies started gossiping.) And not interested in finding an old man for a golden-years romance (as were several of the other elderly ladies). “Don’t tell them I have a double bed,” Joe used to say.

taking But whatever he was doing, whomever he was with, whenever we arrived, Joe’s face would instantly brighten, and he’d say, “What a nice surprise!” In latter years, when we fell into the habit of visiting every Sunday afternoon, he’d still act surprised. Of course, he knew we were coming because the next words out of his mouth, to me, would be, “Now I left the mail out for you to look at.”

He and I would step into his apartment. Meanwhile, Mr. P would sit with Ruth and quietly fix the puzzle—finding and moving all the pieces she and Joe had forced into the wrong spots.

Joe saved every piece of mail he received to show me. Always, there were what he called “begging letters,” and there were a steady stream of them—probably from every mission and monastery in the United States.

He and Rosemary had supported a variety of Catholic charities…but still based on the budget they set up in the 1950s (I think), as all of the checks he asked me to write were for five dollars.

What I noticed happening over the months, then years, I was taking care of Joe’s checkbook was that the more he gave, the more frequently he would receive requests…from the same place. Finally, I had enough evidence in the check register to show him what was happening. “Look Joe, you already gave this place five dollars …in November…September…July…and May…”

In this way I was able to slow the outflow of five-dollar checks. Still, there was the request to donate to the Pope’s charities, which came in a very fancy envelope that was stuffed with an important looking fake-leather folder, leaflets embossed with full color holy pictures highlighted with gold, and a prayer cards with a photo of the Pope, himself. Joe insisted on responding to this one with a ten-dollar check, informing me, “The Pope needs the money.”

Most galling of all (to me) was the monastery that kept up the steadiest flow of requests, addressed to Rosemary. I finally sent back a note in their return envelope explaining that Rosemary had been dead for two years, that receiving mail for her was upsetting to her husband, and requesting that they remove her name (Mrs. Joseph P. Flynn) from their mailing list. Well, didn’t Mr. Joseph P. Flynn promptly receive in return a letter of condolence from Father Somebody-or-other, kindly asking whether Joe would like to have the mission or monastery (whichever it was) say a Mass for her. Oh, yes, Joe liked that idea very much. And off went another check!

Aside from responding to the begging letters, there wasn’t much to be done with Joe’s mail. There was the monthly credit card bill; the only item on it was for Joe’s subscription to The Boston Globe. To this day, I regret the mistake I once made with that charge bill. The Globe, for some reason, had charged Joe twice in one month. I took the bill home, so I could call and ask why…then lost it in the chaos of papers on my desk. The next time Joe’s charge bill arrived, on it was a late fee for twenty dollars. I was horrified. Because I knew, from the days when Rosemary had first asked me to take over the check writing and had stood behind me supervising the I filled in the both the check and the register just in accordance with her system, that Rosemary and Joe had never paid interest or a late fee on their charge bills. I had failed!

In addition to begging letters and the charge bill and a few random advertising leaflets, a happy surprise would arrive in Joe’s mailbox. My younger sister’s friend Norma always sent Joe card’s marking off the year’s holidays—Valentine’s Day, St. Patrick’s Day, Easter, Halloween, Thanksgiving, as well as Christmas. Every time Joe received one, I could see how thrilled he was.

Two or three times a year, events would appear on Joe’s calendar to which families were invited. We made it a point to show up. Always, Joe would be among the cluster of old people waiting anxiously in the lobby for their family members to show up. (I was reminded of parents’ days when our kids were in elementary school. How could you not show up? What disappointment that would cause!)

I remember in particular the Christmas buffet dinner. My sister, Mary Anne, came with me (Mr. P stayed home). When we arrived, a new resident at Allerton, Martha, was with Joe, clinging to his hand.  The four of us sat together; Martha asked if we had any other siblings. “There are six of us,” we told her.

“You should meet Karen, the youngest,” Joe said. “She ‘s a firecracker!”

“Oh, is she spoiled?” Martha asked.

Joe, Mary Anne, and I all looked at each other and burst out laughing.

“There are no spoiled kids in that family,” Joe told her. “My sister, Mary, ran a tight ship!”

The next time Mr. P and I visited,  Joe wanted to explain the situation with Martha. “She came out to drive to Church one Sunday morning and her car was covered with snow.. I had already cleared my off, so I offered her a ride.” (Joe still drove his car to Church, the barbershop, the bank, CVS, and Stop & Shop–all no more than a mile or two down the road.) “I don’t mind driving her to Church. But I know what she’s up to. And she’s barking up the wrong tree. I’m a one-woman man. There’ll never be anyone but Rosemary for me.”

Over the seven years that Joe lived alone, Mr. P and I  visited Joe countless times. From the moment we arrived until we walked out the door–having taken care bills and pills listened to one (or more) of his stories, always fun to hear even though we had heard most of them before—the time spent with Joe was a pleasure.

Walking to the car, I’d invariably say, “What a treat to be with this guy!”

And so, from Joe, we learned how to be old people that younger people wanted to spend time with. I hope we can live up to his example!