What ever possessed me to lug ten-plus pounds of old planner books along when we moved across the country? In fact, why did I save them from one year to the next? Was it a fantasy that some day someone would want to write my biography—a compulsion freeze time in amber—insurance against lost memories? 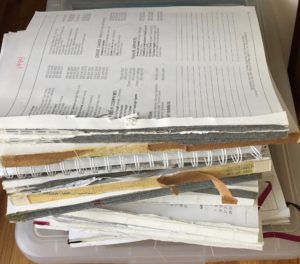 This morning I decided the time had finally come to address these self-imposed questions. I would peek into one of these books to see what it had to tell me. By chance I pulled out of the stack my planner for 1984. (No symbolism intended.)

In 1984 I was thirty-seven years old. Mr. P and I had been married for sixteen years, and had two daughters, Lulu, eight, and Jellybean, five.

As a freelance writer and editor working out of a home office, I was both an “at-home Mom” and a “working Mom.” I took my girls to all their activities and doctors’ appointments, volunteered at school, church, and our local museum, lunched with friends, belonged to the Garden Club and a book group. From there, I took on whatever projects came my way—brochures, video scripts, speeches, instruction books, newspaper and magazine articles, press releases, pitch books, product names and packaging copy, point of sale display materials.

My good friend Bette and her mother (Mrs. O’Neill) took care of the girls when I went to meetings or had assignments at a client site. Teenage neighbors babysat sometimes, too. I hired a woman to clean my house once a week and worked as late as necessary to meet deadlines. (Never able to achieve the efficiency of Brian Flood—the most prolific copywriter of us all. “Work fast,” he advised.) Clearly, I was out of my mind.

On January 3, I optimistically jotted down “Rules of the House” (which were never successfully enforced):

The quest for “getting organized” was always undertaken with gusto at the beginning of the year…and within weeks—or days—was abandoned. Defeated by reality.

The only other memorable item I see in January is the name of a terrible client—one of the few. I wonder if he would suspect (or care) that all these years later, I remember him as a jerk because of his unreasonable demands, rudeness, and refusal to pay for the hours of mine that he wasted.

By tradition the first Sunday in February was always spent with our friends, Rick and Paulette. Our Super Bowl Sunday tradition began in the early 1970s and continues to this day. Unfortunately, a very different kind of friendship ended when a guy we thought was a straight arrow surprised us by trying to collect from both our insurance company and his own for damage caused by an ice storm.

In March we joined a bridge group that flourished for a while, then foundered. Months into it, Mr. P was astonished to discover that I still hadn’t managed to memorize the number of point associated with each of the picture cards—and thus was not bidding in accordance the conventions established by Goren.

April, 1984, was the first year I took over as chairman of the elementary school book fair. Just before the launch of this week-long event, Jellybean came down with chicken pox. Mrs. O’Neill to the rescue! She stayed with our girl so I could fulfill my role as book lady.

May 6 was Harry’s wedding. A group of work friends—and spouses—gathered at our house in the morning. Bert, my first boss in the world of writing, had challenged me to make Eggs Benedict for all of us. I succeeded, more or less. Bert and I collaborated on freelance projects for many years. He and Ann are among our closest friends. As for Harry and Marjorie: they’re still married.

Our big family trip that year was to Disney World, the last week in May. There, we celebrated Jellybean’s birthday–with the help of Donald Duck!

June was quiet. Always memorable: our Sunday night tradition home-made pizza and a trip to The Ice Creamsmith in Dorchester. Or a pilgrimage to the North End for pizza at the European followed by a fight with the crowd at Mike’s Pastry where we filled a box to take home for dessert. (The European on Hanover Street is now long gone. But the North End always remained our go-to destination for great dinners. And for dessert, we graduated to Modern Pastry.)

In July we hosted a big family party to celebrate Aunt Kay’s 75th birthday. Kay taught first grade for 50 years before retiring. I once asked what she did about children with learning disabilities. She said she never had any. Here’s why: “If a child didn’t understand something, I would just explain it a different way.”

August was jam-packed with work. Plus weekends at Waterville Valley, Brewster on Cape Cod, and at my sister’s beach house in Manomet (Plymouth), where suppers always began or ended with fresh caught boiled lobster. One day, mid-week, I took the girls, for a hike along the Freedom Trail—or at least part of it.

The pages for September were even more crammed with notes than those for August. I just noticed that the entry for the 3rd  indicates I worked twelve hours, from noon to 2 a.m. (minus 2 hours for dinner).  That’s how it used to go when your motto is “Never miss a deadline.” After all, every client thought his or her* project was the only thing I was working on!

On the 10th, I see, I had a breakfast meeting at 7:30 at Faneuil Hall in Boston. Eelco Wolf, head of Public Relations at Polaroid, was astonished when I said of course I could be there. “What about getting your children off to school?”  I assured him that Mr. P was perfectly capable. (On a different occasion I recall telling him that I knew he didn’t need to work until seven o’clock every night. “You wait, so that when you get home your kids will already be in bed, your dinner will be waiting, and you can enjoy a quiet evening.” It’s a wonder I wasn’t fired.)

I had time (or made time) to spend the first day in October (or most of it) with Joan—my “best friend since fifth grade.” I don’t think I would have made it through the earliest years of motherhood without Joan. As the years rolled by, she used to suggest that my life would be a lot less crazy if I simply did what other working mother did: get a “real” job. She was right of course. We are still “best friends.”

In November and December, Mr P and I always hosted the family’s Thanksgiving and Christmas dinners. Everything that needed to be done, somehow always got done. We ended the year at the Trapp Family Lodge in Vermont, where Maria herself, we were told, was just beyond that door in the upstairs sitting room.

So what did I learn from paging through my day book for 1984?

I learned that I did not need this pound of paper to remember what was memorable. I also learned that project and appointments of yesteryear are of little or no interest.

And so, the daybooks are sitting in the recycle bin beside my desk, awaiting their inevitable and long-delayed fate. 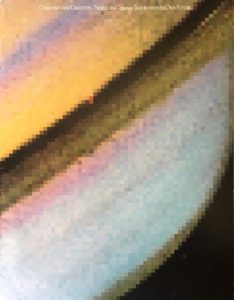 P.S. My favorite  project for 1984 was a recruiting brochure I wrote for Polaroid Corporation’s International Division  It was designed by my friend and former colleague George Martin. Like the best of the collaborations between copywriters and art directors we both  knew, when we saw the printed version that we could confidently say, “It works!” George did me the favor of creating the portrait that truly personifies Mrs. Penfire. You can see what George has been up to since he retired from freelancing in the commercial realm on his website: https://www.gsmartinfineart.com 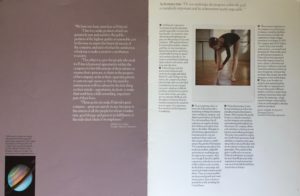 * Who uses these gender specific, singular pronouns anymore? Only someone like me –and my friend, Mary. Together, we were trained in the fine points of English grammar, punctuation, and usage at The Katharine School, now long defunct.

It was a lot easier to toss that calendar into the recycle bin. (I had broken the ice with 1984.) Yet I did page through it first and found a few items of note:

On  March 11 I was called up to school by the kindergarten teacher to meet with her and the guidance counselor about Lulu’s tendency to boss the boys around. (I vividly remember that I was crying on my walk to the school, to think my child was failing kindergarten.) The guidance counselor, upon learning that on our block there were five little boys and no girls for Lauren to play with nodded and pronounced, “That’s why she’s not intimidated by boys. No worries. This behavior is what will make her a leader!”

Mr. P’s grandmother had suffered a severe stroke.. His parents decided to care for Grandma Blake  John’s siblings decided that each of them should take turns “babysitting” Grandma on Sunday evenings, so his parents could have an evening out. June 6 was our first turn caring for her. Inevitably, two people in their mid-sixties taking care of a paralyzed nonagenarian turned out to be an unworkable arrangement.

August 7 was the annual pool party at the home of Mr. P’s boss. We all loved that event!

September: We’ve all had the experience of saying, when young children says something that surprises or amuses us. “Oh, I must write that down. Sometimes, I did. Two-year-old Jellybean stood beside my desk as I was typing on my word processor (a desktop Mac  was still several years in the future). “Are you making money for my big girl bed right now?” she asked. I said “Yes,” which prompted her to ask: “Where does it come out?” She was disappointed to see the printer spew out only papers.

As Jellybean frequently came to the office with me, she knew Harv Johnson, the Advertising Manager at Polaroid for whom I did a lot of copywriting. I explained that once I brought these papers to Harv, he would give me money. On September 7, Lulu’s first day of first grade, I took Jellybean to Cambridge with me. (She often came along, sat at the secretary’s desk outside Harv’s office and played quietly with Duplos.)  After we arrived back home, she fished two dimes and a nickel from my jacket pocket. “Is this the money Harv gave you?” she asked.

Lulu arrive home bubbling with news, “I got mixed up a little finding my room. First this line, then that line. I only cried for a minute. But I found the room myself. The teacher is about your age, but two feet taller. She’s pretty. Wicked Nice! I got 100 on my first paper.”

Looking BackMemoriesPersonal HistoryThe Things We Save