Servants. We children (appropriately agog) were told that the third floor was originally the domain of servants. Nobody knows how many.

And that was why the bathroom at the top of the stairs was so different from the one on the second floor: claw foot tub, basic white sink, bead board wainscoting rather than ceramic tile, and an ancient toilet like the one in the basement. Old-fashioned maybe, but a lot of fun; to pull that chain and witness the noisy, churning, gushing in the bowl was, for us, great (albeit forbidden) entertainment.

(Only recently, all these decades later, did my younger brother tell me that that smallish bathroom window gave the boys—once they were moved upstairs—easy access to the roof of the house, from which they could see the ocean, or, to be more accurate, Boston Harbor.) 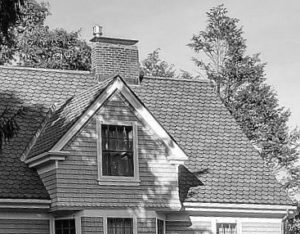 The front bedroom on the third floor, with its very large window (so low to the floor it would never pass muster with today’s building codes) was the most spacious, most light-filled, most private—and so probably reserved for the housekeeper.

The smaller room alongside the stair hall was barely large enough for a single beds. I alway imagined this must be a “maid’s’ room.” (But perhaps not. ) Its single window looked out over the shrubbery and trees toward the road.

The first time I looked into that room…on one of those visits before my parents bought the house…the floor was carpeted with dead elm beetles; they were gone by the time we moved in, but the champagne flute shaped skeleton of the dead elm tree along looming over the holly tree and the well–leafless limbs reaching skyward–was not.

As a pre-teen, I took over this room as my personal club house and papered the walls with a collage of autographed photographs from movie stars; back then, you could write fan letters and get glossy signed photos by return mail.

The big L-shaped room along the back and south side of the house could have accommodated several beds. With windows that looked out toward the barn, it had good light (perhaps, the sewing and mending was done up here). A door facing those windows opened to a walk-in cedar closet, with two (or three?) stacks of built-in drawers climbing the wall on the left, two poles, one behind the other, for garments on hangers, to the right. This explains, I guess, why the bedroom closets on the second floor were not very large. They didn’t need to be, when there were servants to fetch and carry garments as the seasons changed.

In the upstairs hallway, a massive linen closet–so big you could step inside to face the wall of storage–drawers below, a counter, and then shelves above. I visualize uniformed maids, bringing neatly folded sheets and towels up from the laundry room and stacking them in their designated spots.

Imagine the hard, heavy work of those whose daily tasks kept this big house of this era immaculate and its occupants well dressed, well fed, and ready at a moment’s notice to receive callers–or by pre-arranged invitation to entertain  guests with glowing pride.