This house was definitely designed with the goal of letting in as much natural light as possible–with more than fifty windows (all of them as large as possible for their places), a sun porch, a sleeping porch, and windows in all exterior doors (except for the one in the cellar). The double front doors were each fifteen-light glass panels, as was the single door that gave the sun porch access to the uncovered side of the front porch and the brick steps down to the lawns and gardens on the southeast side of the house. Even the utilitarian back door (servants and deliverymen only) had a large clear glass pane. There seemed to be a small square (or rectangular)window on just about every exterior wall where there wasn’t room for a full-size window. Interior windows, and glass-paneled doors ensured that light would flow to the house’s innermost spaces.

Pairs of ten-pane bi-fold French doors could be closed to separate the twin parlors from the front hall, and the parlor to the right of the front hall (which we called “the living room”) from the dining room, behind it. My father didn’t like all those doors. The two living room pairs ended up in the barn.  The Crosbys referred to the parlor to the left of the hall as “the music room.” Knowing this might have been my father’s inspiration for purchasing a second-hand baby grand piano. I was the one designated to walk down to Mrs. Allen’s house on Cheever Street for lessons. But for us, that room was “the den,” home to our one-and-only television set. And so piano practice tended to go by the wayside. And the doors to the “den” stayed. But they were rarely—almost never—closed.

The den was where our family gathered. (We sat in the living room only on Christmas day.) We always ate in the kitchen, except for Thanksgiving and Christmas, though the big dining room table was put to use not just for holidays, but every Saturday night when Aunt Rosemary and Uncle Joe came to play cards with my parents. 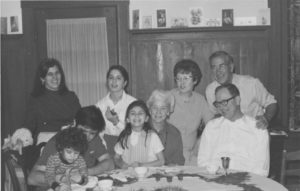 The furniture in dining room was particularly handsome: mahogany Chinese Chippendale with beautifully carved detailing; the round pedestal table—at least five feet in diameter—opened to accommodate more leaves than we ever used. The tops of the table, the buffet, and the server were each protected by a thick sheet of beveled glass. My father used the dining room table as his desk when he sat down with the bills and his checkbook. The table was also a place for board games, for working on school projects…and for folding and sorting laundry. Periodically, my mother would summon all six of us (or as many who were in the house) to help sort and fold the clean laundry she had piled on the chair in the corner of the sun porch (where we kept the ironing board—always standing ready.)

There was a fifteen-light door between the dining room and the sunporch. But my mother covered the glass (and blocked much of the light) with a curtain (probably to hide the chair piled with laundry). On other end of that same wall between the dining room and the sunporch, pale blue- and pink-tinted light filtered in through a Tiffany-like stained glass casement window. I think this window was saved from being covered by a curtain because its colored and rippled glass provided adequate camouflage for the ironing board. 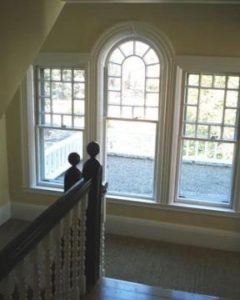 The triple windows on the staircase landing provided much of the natural  light that reached the big square hall on the second floor. Surrounded by doors to the third floor stairway, all four bedrooms, and the bathroom, this space–nearly large enough to be a sitting room–could  be brightly or dimly lit during the day, depending on how many of the bedroom doors were left standing open.

The bathroom must have been up-to-the-minute at the time the house was built. The toilet in its tiny cubicle (with frosted glass window above, of course) had a side door for access to/from the hall, as well as a door straight ahead into the larger space where the tub was on one side, and on the other (another frosted glass window) and beside it, a with mirrored cabinet above a huge porcelain sink. White rectangular ceramic tiles (too delicate to be described as “subway tiles”) were ceiling-high in the corner of the room that surrounded the bathtub. On the other two walls, the tile came came three-quarters of the way and was nicely finished with a continuous Greek key border in pale blue, and above that a white ceramic tile  “chair rail.”

I was horrified years later when told that a subsequent owner had papered over the tile…as well as the door to the third floor (Why?!) …and then the next owner to come along, thinking the paper covered nothing more than lumpy plaster, took a sledgehammer to the wall before discovering—too late—his error.

The four bedrooms on the second floor stood directly atop rooms downstairs, and echoed their shapes…so the three across the front all featured windowed bays. The bedroom over the den became Mary Anne (my older sister)’s room—the only one that didn’t have at least one door to another room. (This house is beginning to sound like a real-life setting for a game of “Clue,” isn’t it?) The front bedroom–mine–was over the front hall. So from my bed I had a view of the wall sconce in the hall. (Thus, I can still see in my mind’s eye the hall light going on and then off in the middle of the night during a thunderstorm. I was convinced, at the time, that the lightning rod mounted on the very highest point of the house must have been struck and that the electricity being conducted down to the ground had momentarily illuminated the light. But this unlikely, unscientific theory has to have been a childhood fantasy. More likely, the flashing light was just a dream (or an attempt by one of my brother’s to scare the bejesus out of me). My room had a connecting door to my parents’ bedroom, and a walk-in closet that featured a built-in-dresser below the bar for hanging clothes. Was this room intended to be a boudoir? A dressing room? A nursery? Who knows?

The master (primary in today’s lingo) bedroom was over the living room. When the door to this room was open, it hid another doorway that was something of a secret passage-through a minuscule closet–into the fourth bedroom (over the dining room). Beyond this bizarre mystery space was had a lovely little fireplace; beyond that a closet. And beyond that, yet another door (with a plain glass panel on top, if I remember correctly) to the sleeping porch (over the sun porch) 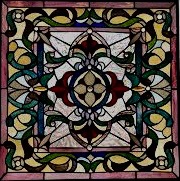 I believe that fourth room was the biggest on the second floor. Was it really intended to be a bedroom?  Its style was quite different from all the others; it had ceiling beams (set in squares), and a lantern-style central light fixture. Whatever the intent, for us, this was always a bedroom. At first the boys bunked in here. This room, too had a door to the sleeping porch, its top half a multi-colored stained glass window. My younger brother saw a scary face in the pattern of that window…so my mother sewed a curtain to cover it.

My little sister, Kathy, just sixteen months old when we moved into the house was put in Mary Anne. After a few weeks with my parents, Karen, the baby  was moved in with me.

Eventually, the boys were moved to the third floor, and the boys’ room became the (little) girls’ room.

A word about the narrow sleeping porch that sat atop the sunporch. It was paneled in unpainted bead board that had been varnished and so had darkened with. With a door to my parents’ room and another to the boys’ (or eventually girls’) room, it boasted windows on its three exterior walls.

I think this might have been my mother’s least favorite room in the house.  She called it “the funny room,” and so that became its name. It was unfurnished except for an old wooden file cabinet (painted white) in which my mother stored the best of the baby clothes she had saved from 1940 onward (how wish I could go back now and look at all those delicate, detailed, and beautifully sewn little outfits). In addition to the (theoretically) off-limits trove of baby clothes, the funny room became a place to stash odd items that any one of us might consider a treasure, and which my mother inevitably considered junk. (Periodically, the junk would be purged, to the sound of many protests, much complaining and even a few wails of grief.)

The house was BIG. My mother often referred to it as “this old ark.” For my father, this house was “love at first sight.” For my mother–over the  twenty-five years she lived there–I believe it was a love-hate relationship.

Who designed this house? I always assumed it was one-of-a-kind, custom designed by an architect. But then, long after the house had been sold to new owners, I picked up a brochure in a paint store which featured a house of identical design on its cover. (I think saved that brochure; do I still have it stashed away somewhere? I hope so.)

Looking back, among all the questions I have about this house, the most puzzling is: what was the point of all those doors-behind-doors on the second floor? Was it so the mistress (and/or master) of the house could move from room to room without encountering…servants? Was that degree of privacy from people who, presumably, washed your underwear really necessary? We’ll never know!