To open the cellar door was to enter a very different world. The stairs, narrow, worn boards, unfinished and uneven, took you down to an open, mostly unfinished space.

The house, on its foundation of giant field stones, was built into a slight slope, so the cellar was deep and dark toward the front, but flooded with light at the back, where the floor was at ground level, and there were large windows were set into the walls.

At the base of the stairs, there was a lot to take in.

The furnace—a huge white presence squatted like a huge faceless Buddha in front of the mass of brickwork that underpinned the fireplaces and central chimney. A black cast iron door in Buddha’s belly faced the now-empty coal bin. Squatting below that door, an aged green oil burner. (Do you wonder why the furnace was white? A thick coating of asbestos!)

To the right of the stairs, the coal bin gaped—empty. Two parallel panels of wide rough-hewn horizontal boards, perhaps ten feet apart and nearly ceiling high, jutted out from the fieldstone wall where a window near the ceiling had probably served as a coal chute. On the far side of the coal bin, a small workshop—with a study workbench where my father occasionally worked on fix-it projects; he installed a  pegboard to hold his tools.

Beyond the workshop, in the darkest part of the cellar, under the front hall, was the oil burner, if I remember correctly.

At the base of the stairs, turning left required a small step up to a slightly raised wooden walkway; left again would take you into the laundry room. Going straight would take you out the back door and into to the laundry yard–several rows of clothesline strung between sturdy uprights.

The laundry room was under the kitchen. Three large items still in their original places delineated the hard, heavy work of laundresses, back in the day. Along the inside wall on the right, a pine table on nicely turned legs stretched the full distance (six or eight feet?) from the doorway to the corner. (Looked very much like the one I’ve used as a header, above. I’ve often wondered where that table ended up; in today’s world, no doubt it is the prized—and valuable—centerpiece of a kitchen or dining room, somewhere. Why didn’t one of us keep it?) 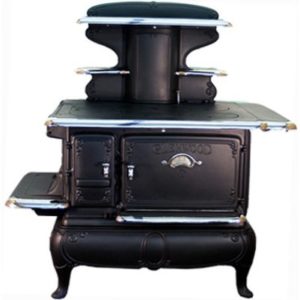 On the exterior back wall, a window, a chimney, and in front of the chimney, a massive cast iron stove. Across from the 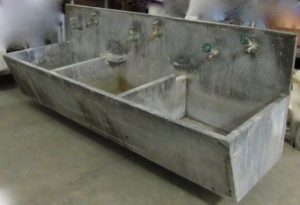 Windows over the sinks looked out onto the pathway that led from the back door to the cellar door and the greenery beyond. Across the inside wall of gray painted gray bead board marched a row of twisted wire hooks.

Back to the base of the stairs. Straight ahead: an empty, unfinished space under the dining room, where two large windows, directly under the dining room windows, let in plenty of light. Here, my father eventually set up a ping-pong table, where he and the boys played some fast-paced, highly competitive games. 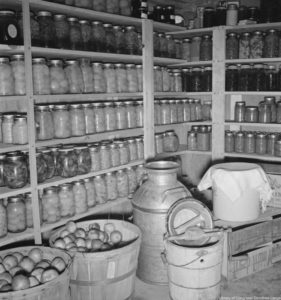 Beyond the ping-pong table, opposite the windows, another bead board wall and a doorway into the cold cellar. (This must have been under the living room) Windowless. Dark. Cool.  All four walls were lined floor-to-ceiling with shelves made of plain boards somewhat carelessly nailed together. Not nearly as jam-packed or neat as the one shown here (from the Library of Congress Archive) but this was the layout. My younger brother Richard has told me that the newspapers lining the shelves had dates in the 1890s. (Could that be right? Was the house built before 1900?) The shelves held dozens of canning jars, many still filled with preserves. There was also an odd assortment of empty bottles and jugs. I remember one, in particular, a bottle probably big enough to hold a gallon, in the shape of an apple, and with a textured leaf.

The overhead light, turned on by string attached to a short chain, had very old bulb—an ovoid shape curved to a point; when lit, a pair of illuminated wires vibrated inside it.

I had an old brown jug and an antique gallon bottle made into lamps, the latter I still have here in California.

Under the cellar stairs, by the way, was a cubicle, which enclosed a pull-chain toilet, no doubt for the sole use of the servants.