Many Questions. No Answers. Part IV

Many Questions. No Answers. Part IV

Even those of us who think we harbor no prejudices and claim to be color blind…are not. We note what people look like. We notice what the people we encounter…the people we meet…the people we know, whether slightly or very well…look like. Faces, first of all. Of course. But also height. weight, hair color, eye color. We notice glasses and, clothing. Styles of dress. Piercings. Tattoos. Hair color..and hair style. Eye color. And, yes. Race. Ethnicity. We’d like to think we make no judgments based on all this visual information. But who are we kidding? Inevitably, we do.

When I worked at Polaroid…all those many years ago…I gained a bit of insight into racial inequality when I signed on to tutor fellow employees who were studying to prepare for high school equivalency exams. (This would earn me an extra six dollars an hour for two hours, two nights a week–$24 in all, at a time when our budget for weekly groceries was $25!) It meant driving back in to Cambridge for sessions scheduled for 10 p.m. to midnight. For those in my small group all worked on the C shift (nights).

I have vivid memories of only two students in my small group. Karl was a German machinist (and how or why did I know he drove a Mercedes?) who needed no instruction, only needed to take the test, which he ultimately aced. Why do I remember Karl so well? Because he asked for help filling out his test application. He pointed to the line for military service. “Did you serve in the military,” I asked him. “The Luftwaffe,” he said. “I think you should just leave it blank,” I advised him.

And then there was Louise. A very pretty young black woman. Only in her early twenties, she was the mother of four young children. She worked nights, she told me, and her husband worked days. So that one of them could always be home with their kids. Louise was struggling with the workbook. I could see she just wasn’t making any progress. I knew she lived in Mattapan, a Boston neighborhood only a couple of miles from my house in Milton. I asked Louise if she’d like to come to my house when she had some free time so I could give her some extra help. She did. She came one Saturday morning. We sat together and I suggested the easiest way to work on her reading comprehension skills (which was where she was stuck) might be to read a paragraph of the morning newspaper together. And that’s when I realized Louise could not read. I remember asking her how far she had gone in school. She said eighth grade. Where? South Carolina. I remember how I boiled inside to think of how this lovely young woman was really robbed of opportunity because even though she managed to get herself to school for all those years, nobody ever bothered to teach her to read—or to notice that she could not.

After a few months, I found I could not keep up with the tutoring job—despite that welcome extra income. I gave it up, feeling guilty about Louise and all the others in my little class; I felt I was abandoning them. (All, that is, except Karl, who easily passed the test.)

I’ve never been, or considered myself an activist when it comes to race relations. But I’ve always been aware that black people have a history and a culture very different from my own, that they have suffered collectively in ways that I can never fully understand or even imagine. But also that there is a richness to their art, their music, their literature that, in turn, has enriched us all. Surely, sharing in that underscores and celebrates our common humanity. Even when that sharing involves, pain and horror as well as joy and beauty. 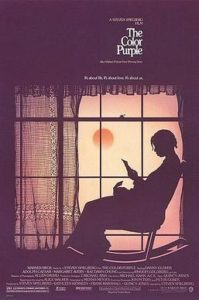 In 1973 it was Sula, Toni Morrison’s first novel. I have devoured it, excerpted in Redbook magazine, read on the subway on my way to work. In 1983 it was The Color Purple by Alice Walker. The book and then the movie. A stunning uncovering of the kind of difficulties and miseries unknown to a young woman like me, who had grown up in a life not perfect but never anywhere near so desperately harsh. The movie was my introduction to Whoopi Goldberg and Oprah Winfrey, who were not then the cultural icons they have become. What a heart-tearing experience being immersed in this story of resilience, courage and ultimately survival in the face of nearly unfathomable mistreatment and abuse.

I guess those earliest introductions to black literature sparked the the compulsion to know more. It seemed to me, somehow, irresponsible to be ignorant of the history of those who had been thrust into a cauldron of misery from the moment their ancestors feet touched the soil of America.

Back then, when I worked at Tech Square in Cambridge (which was not crammed with tempting eateries as it is today), I often walked over to the M.I.T. Coop at lunchtime, to buy an affordable meal and browse in its book shop. There, one day in February, I stopped at a table displaying books for Black History Month. I picked up a heavy paperback titled Bullwhip Days: The Slaves Remember. The blurb on the back read, “In the 1930s, the Works Progress Administration commissioned an oral history of the remaining former slaves. “Bullwhip Days is a remarkable compendium of selections from these extraordinary interviews, providing an unflinching portrait of the world of government sanctioned slavery of Africans in America. Here are twenty-nine full narrations, as well as nine sections of excerpts related to particular aspects of slave life from religion to plantation life to the Reconstruction era. Skillfully edited, these chronicles bear eloquent witness to the trials of slaves in America, reveal the wide range of conditions of human bondage, and provide sobering insight into the roots of racism in today’s society.”

I bought the book. I found its contents gripping. Horrifying. Heart-breaking. Nearly beyond belief. Yet, unfortunately, all too believable.

Over the years I’ve given away, repurchased, and given away again more copies of this book than I can count. I think at this point one of my daughters has my most recently purchased copy. After all this time, I finally decided to find out what those more knowledgeable than I am think of it. So I looked up the review that appeared in the New York Times at the time of its publication. Caryn James, the reviewer, expressed impressions that echoed mine. She found the narratives “harrowing.” They describe being whipped, having turpentine or salt poured in open wounds, “the emotional torture of a mother whose child was sold while she was working in the fields.”

Acknowledging that “no reader, black or white, is allowed the complacent feeling that he knows all about the evils of slavery,” James points out that because most of the former slaves were in their 80s or older when interviewed, the passage of time—and the fact that they were being interviewed in the midst of the Depression—may have actually softened their memories. James found many deficiencies and inadequacies in Mellon’s editing and his introduction. Yet she concludes that book is “eloquent and important.” That was certainly my impression. It blew me away. And established my quest, ever since, to better understand the impact of slavery on our country and on all of us, black and white.