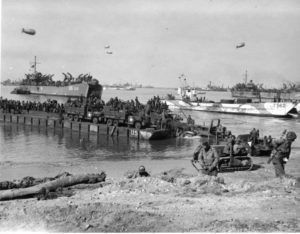 What we do not see—are the “Seabees” of the U.S. Navy’s Construction Battalions (CBs), working at breakneck speed, just beyond the view of the few cameras recording the cataclysm on the beaches.

The Seabees’ hard work, ingenuity, and courage under fire  were key to the success of the  D-Day landings. For the Allies faced two enemies on June 6, 1944: The Germans. And the sea. Ultimately, the Army vanquished the Germans. But before they could do so, the Navy needed to conquer the sea. The challenge was daunting.

In the English Channel, fierce waves and sudden gales make for rough, unpredictable crossings. The tidal shifts are so extreme along the Normandy coast that in small harbors boats sit in the mud at low tide—then, are lifted into water twenty feet deep when the tide rises to its peak. Vicious crosscurrents can toss up new sandbars in a day. Meanwhile, on beaches. When the tide goes all the way out, the water’s edge is half a mile from its high tide mark. This happens twice a day.

No surprise that the Germans believed it was simply impossible for the Allies to make a large-scale landing, except near a major port. However, the Allies had learned through the bitter experience of Dieppe in the fall of 1942 that the enemy was capable of making such a landing was impossible. So the Normandy Coast was to be their target.

The logistical challenges were mind-boggling: Miles of wide, white sand beach vulnerable to well-fortified pillboxes on the cliffs above. Tides that made it impossible for Navy ships to get close enough to land troops—not to mention  trucks, tanks, jeeps, ammunition, food, equipment, and medical supplies. Countless tons of materiel were essential because this offensive was  intended to continue non-stop to the very heart of Berlin.

Planning for Operation Overlord began months before the invasion was to take place. Engineers designed massive artificial harbors; floating piers connected to the shore with bridges. But these were to come only after the beaches were secure.

The Navy’s first urgent challenge was how to unload its Liberty Ships and LSTs, its workhorse cargo and troop transports. On normal beaches, an LST (Landing Ship Tank) could extend its ramp to shore, enabling trucks, jeeps, and tanks to drive off. At Normandy, beaches were definitely not “normal.” 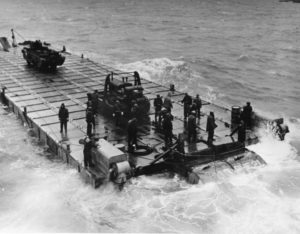 The solution was based on the infinitely adaptable pontoons that came to be known as the Seabees’ “magic boxes.” These five-by-seven-by-five-foot cubes of sheet steel (think giant Lego blocks) could be fastened together in various combinations to become piers, causeways, floating dry docks, and barges. Once assembled, these structures were seaworthy and capable of supporting great weight.

Imagine a huge floating barge made up of these magic boxes. Six boxes wide and 30 boxes long, the barges measured 41 by 176 feet. Each was propelled by two huge outboard engines and helped along by a tug. Since they drew only forty-inches of water, barges could be rammed right up onto the beach for unloading. These D-Day cargo ferries came to be known as “rhino barges”— because an airman said that from the sky said they looked like giant rhinoceros.

Each barge could hold 80 trucks and jeeps or ten Sherman tanks. Two of them could unload all the cargo of an LST in just two trips.

The Seabees assembled 64 of these ferries, 32 each for the American and British forces.

On June 4, the ferries began their channel crossing towed behind LSTs on 200-foot lines. Each barge held a bulldozer chained down on its center, a wind-battered tent toward the back. In the dark of night, the rhino was just about invisible, except when a brief light appeared inside its tent as the bargemen used a blowtorch to fix themselves some hot coffee.

In the early hours of June 6, amidst the massive armada crossing the channel, this highly specialized flotilla halted at the designated rendezvous area several miles offshore. At 4 a.m., the Seabees dropped the towing lines, cranked up their outboards, and maneuvered to the front of the LSTs that had been towing them.

The pre-dawn hours were very dark but once bombardment of enemy emplacements began, the beach was alight. Each time a battleship fired a salvo, the sky would momentarily be as bright as day. Working amid these earliest stages of the battle, Seabees struggled to “marry” LSTs to barges so unloading could begin. Four-foot waves made the men’s footing difficult. Several were washed overboard. Fortunately all who landed in the drink were pulled back topside again without being crushed between the wave-tossed vessels or caught in the screws of the giant outboards. 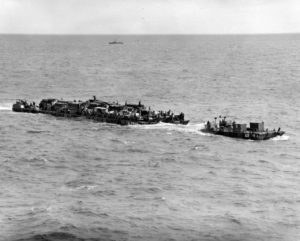 As dawn was breaking, with the LSTs securely linked to barges, the transferring of cargo began. All hands worked at a feverish pitch focused on their task yet immersed in the ferocious noise of battle. Three or four hours later, all the barges were loaded and ready—twelve at Utah Beach manned by Seabees of the 81st Construction Battalion, twenty at Omaha manned by the 111th. But enemy gunfire was so intense that the first rhinos were forced to stand off for hours, unable to get their cargoes to the beach until late evening. There, the Seabees were horrified to see mangled bodies floating in the shallow water, sprawled in the sand. Yet there was nothing to be done but keep working, unload their cargoes. More hours of heavy work. Then back to offshore anchorages, grateful to have survived the day. 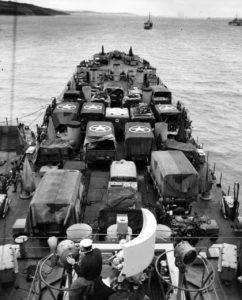 In total, Seabee rhino barges ferried 1,500 vehicles on their first trips to shore. In fact, over the first three days of the invasion, eighty-five percent of all the vehicle cargo landed on Omaha and Utah beaches—jeeps, trucks, tanks—was brought in by Seabees. But barges are just part of the story.

Seabee causeways, also made of those Lego-like pontoons, provided ship-to-shore roadways nearly half a mile long. Submerged during high tide, they were ready for traffic as soon as the tide went out. During low tide, vehicles could drive from LSTs to the beach without even getting their tires wet.

After three days, with the beachhead secure, the causeways were no longer needed. LSTs could discharge their cargoes right onto the beach; meanwhile, rhino ferries could focus on unloading Liberty ships.

Meanwhile, the U.S. Navy’s 108th Construction Battalion was building a massive artificial harbor off Omaha. Seabee crews had manned the gigantic components as they were towed across the channel—no doubt a seasickness-inducing voyage—and handled their assembly once they were jockeyed into position. At the same time, their British counterparts were building a duplicate artificial harbor off Arromanches.

The battle plan for Operation Overlord had many components, not just the beach landings, but assaults by paratroopers as well. An important objective for them was Cherbourg with its deep-water port. The battle for this major coastal city was fierce and prolonged. The Germans well knew of the port’s logistical value and were determined not to relinquish it intact. And so, before the German garrison surrendered Cherbourg after three weeks of brutal fighting, they did a thorough job of mining its waters and wrecking its docking facilities. Repairing all this damage would take many weeks—another task for U.S. Navy Seabees.

As this work went forward on a round-the-clock schedule, ship-to-shore supply operations continued non-stop on Normandy’s beaches. And so, as it turned out, it was beaches—not harbors—that became the conduit for the tons of materiel so crucial for military victory.

Paris was liberated on August 25th.

And the Seabees magic boxes became a proud footnote in the history of the Allies hard-won battles for the liberation of France.

From the earliest months of 1941 through the War’s end in August of 1945, more than 350,000 skilled men served with the U.S. Navy Seabees. The Seabees did far more than handle the transport of countless tons of military vehicles, weapons, ammunition and crucial supplies. From the beaches of Europe and the Islands of the Pacific the U.S. Navy’s nearly 150 Construction Battalions literally built America’s victory: they constructed 111 airstrips, 441 piers, 2,500 ammunition magazines, hospital capacity for 70,000, warehouses, fuel and water tanks, infrastructure for radio transmissions, electricity, and plumbing—more than 400 bases around the world.