The weeks immediately following our family’s move must have been chaotic. There was my mother with a two-week old baby and five other children. Kathy (just sixteen months old) had been brought home by Aunt Sadie and Uncle George, who had cared for her at their home in Brighton for several weeks bridging the move. (They reported that their own four children protested when it was time for Kathy to go back to Milton.) I can remember my mother, sitting in her comfortable chair by the kitchen chimney, holding the baby (Karen), and reacting to Kathy’s reaction to her and the surroundings.

“She doesn’t even know me.” My mother started to cry.

Looking back at that scene I’m thinking how impossible it must have been for a toddler to process what was going on? My bet is that Kathy was wondering, “Where the heck are we, and why is Mommy holding this little baby and not me?”

The day Grammy drove me back to “the new house,” I must have been staying with her for a while. This was a far less frequent…and, to be honest…less enjoyable experienced than staying with Aunt Rosemary and Uncle Joe…which I had done often, ever since I was a very little girl. Grammy was “not much of a housekeeper” (one of my mother’s standard lines)…and she had a skinny (and somewhat smelly) long-haired black dog (unimaginatively called “Blackie”). So her house was not nearly as comfortable as Rosemary and Joe’s. Plus Grammy was “not much of a cook,” so meals were pretty haphazard and not nearly as good. (And as far as her having a stockpile of Oreos or M&Ms or taking me up to the corner store for a Hoodsie… forget it!)

Still she was nice enough, and easy to get along with. Grammy, a widow since 1943, had become quite inventive in supporting herself. She had purchased a cottage at Green Harbor, and also a crazy old “hotel” at Brant Rock (both in Marshfield, then a remote seaside backwater not the fashionable and expensive suburb it is today). So she rented both the cottage–and rooms–to beach-goers during the summer. Meanwhile, at home in South Weymouth, she had been running “Ma’s Yarn Shop” since even before the War. There was a display case on the porch amidst odds and ends of old furniture and random boxes overflowing with knitting patterns, needles, and jumbles of yarn. Grammy was a canny businesswoman. She drove herself to the Bernat Yarn factory in Uxbridge, and in addition to all the beautiful skeins of various yarns she sold to women who wanted to do their own knitting, she purchased big boxes of “ends”–a tangled up variety of colors and types of yarn.

When I stayed with Grammy, she mostly left me to entertain myself. I remember exploring the back kitchen (back in 1921 when “Ma” ( now Grammy) and “Pa” and their young family moved here from Boston, this ante-bellum farm house had had no indoor plumbing, but two “kitchens.” Probably this back kitchen, which had a door onto the street, had been a long-ago “shop” for processing and selling the farm’s dairy produce, possibly even eggs, milk, and cheese. This space had instantly been divided, with one side turned into a bathroom; the other was just a hodgepodge storage room. I remember finding, among other things, stacks of books in there, so I made myself comfortable and read the one I thought looked most interesting, Fear Strikes Out: The Jimmy Piersall Story (not exactly appropriate reading for a nine-year old.)

Though I was free to poke around…or lounge around reading comic books (or books found in the back kitchen)… there was always the possibility that Grammy would put me to work. Sometimes it was rolling yarn into balls; for this she had a wooden stand with removable free-spinning two wide wheels–one at the top, one at the bottom. She would open a skein of new yarn, stretch the neat oval bundle over the wheels, one at a time, on the free end of yarn to set the wheels spinning. (This device, obviously home-made, was nothing like the “yarn swifts” commercially available today.)

Grammy used those balls of beautiful new yarn to make the sweaters, mittens, and hats … or baby sweater, bootie, and hat sets…to fill custom orders or sell in her shop. Her other endeavor necessitated the task she sometimes gave me–untangling the yarn in the boxes of “ends” she had brought home from the yarn mill and roll each length (some quite  long and thus very tangled) into neat balls. From these, Grammy would crocheted multi-colored squares that she ultimately turned into afghans

There were a couple of privileges to staying with Grammy that would have been unheard of next-door at Rosemary’s house. First, she let me have a cup of coffee (as she did) after supper. And even  though I didn’t necessarily like coffee, this seemed like a wonderful privilege. Yet coffee at Grammy’s wasn’t the delicious brew thickened with cream and sweetened with sugar that I tasted at home when my mother left a little (then cold) in the bottom of her cup.  Because Grammy lightened her coffee with evaporated milk from a can (not cream), it wasn’t nearly as delicious. Still, a privilege was a privilege. 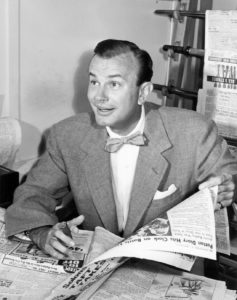 The coffee, I realize in looking back, served its purpose. For the second privilege was being allowed to stay up late to watch Jack Paar and the Tonight show on television. But, honestly,  it’s only now, looking back, when the lightbulb has exploded over my head: the reason Grammy let me stay up so ridiculously late was because my “bed” was the studio couch in “the front room” and that was exactly where Grammy sat when she watched television (while knitting as fast as her fingers could fly). Putting me to bed at my regular bedtime would have required her to give up her accustomed routine, and that was not going to happen.

Whatever the reason I was with her–now lost in the mists of time–Grammy was driving me home from her house to our new house on Brush Hill Road, where we had only been living for a very short time, and I had been told to show her the way.

I knew pretty much how to get to and from our old house (on Elm Street) to Aunt Rosemary and Uncle Joe’s (next door to Grammy’s) in South Weymouth because I had been back and forth countless times.

Back then, we always traveled from Milton to South Weymouth via the Blue Hills and Route 37. I knew exactly how to get from the intersection of Unquity Road and the Parkway to our old house on Elm Street. But getting to the new house…well, that was an entirely new route.

I knew for sure we had to go left on Canton Avenue instead of right. But then what? I had been over Robbins Street, of course, a million times on the Parkway West bus. And I’m sure I was smart enough to figure out that going to the end of Robbins Street rather than turning onto Blue Hill Avenue (reversing the route of  the Parkway West ) would get us to Brush Hill Road. And that turning right would take us past the Lions and Loews and on to our news house. (What I didn’t know was that the distance via the route from the Unquity Road/Canton Avenue intersection was only about a mile–or a little more.)

This Way… Or That?

Why take any chances? 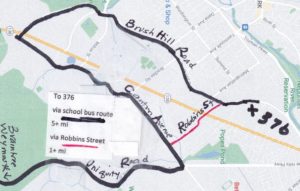 I would take Grammy the same way the school bus went. I knew it was a longer way…but I didn’t have any idea how much longer. So I directed her all the way up Canton Avenue to the very end of Brush Hill Road (two plus miles), then all the way down Brush Hill Road to our house (two plus more miles). Well, when we arrived, Grammy told my mother, in no uncertain terms, that this had turned out to be a far longer drive than she had anticipated, and that there must have been a better way. When my mother asked how we had come and why I hadn’t taken Grammy up Robbins Street.

A straight line is the shortest distance between two points.

This geometric principle was first articulated by Archimedes in the third century BC. Looking back now, it’s a fact so obvious that I think of it as something I’ve known forever. But perhaps I did not really know or understand this fact until I took Geometry in the eighth grade.

And so I think I should have been forgiven for taking Grammy Flynn the long way that day when I showed her the way to our new house. Because back then, in 1956, I was only a fifth grader.