I just sent away for another “Day-at-a-Glance” calendar. Don’t ask me why.

I always start a new year with the best of intentions. I will keep a diary…of sorts. Why do I continue to entertain the delusion that I can…or should… or will…do this? Faithfully writing down what happened each day and my thoughts (which, in my busy brain, are always many). 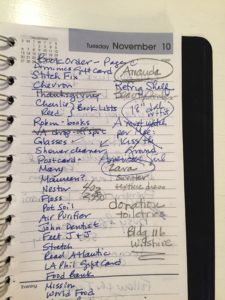 Often I start out a new year by dutifully entering the events of January 1st and perhaps the following few days. Then… chaos. The pages get filled with random notes or lists. Sometimes I’ll even turn to the current day’s page and make a “to do” list—a throwback to my working days.
Realizing the goal of an orderly diary is impossible (I’m not Samuel Pepys after all), I have long since learned to satisfy my compulsion for keeping track of events, ideas, and random thoughts with sporadic essays created on the computer.  I keep these in a folder called “Journal.”

Throughout my years of freelance work, I always kept track of appointments, assignments, and hours worked in appointment book that I kept on my desk. That was a necessity. I couldn’t compute invoices for time spent on projects unless I had written my hours down. Back then I also kept an 8 x 6 wire-o notebook on my desk. Each morning I’d  write down what I wanted to get done that day. And each night there would be a line neatly drawn through  a few items on the list—sometimes, none.

Meanwhile, the social events, kids activities, and doctors’ appointments all got jotted on the wall calendar in the kitchen.

It’s not so crazy that I used appointment books and calendars. What is a bit crazy is that I’ve kept them. Why? Do I think I’ll someday want to know what I was doing on a specific date many years ago?

Yesterday I came upon a box I inherited (I’m not sure why) that contains diaries kept by my husband’s grandmother. I always knew Grandma Blake had kept a diary. The older ones—from the 1920s (if they exist), ‘30s, ‘40s, ‘50s landed elsewhere. The ones I have here are from the ’60s and ’70s. A couple are real 5-year diaries. Others are just little notebooks

John’s widowed grandmother lived on the dairy farm in Blackstone, Massachusetts, that she and her husband had purchased in the 1920s. Her older son, Ken, ran the farm single-handedly. Grandma’s entries were brief, just a few lines for each day. Terse. And predictable. Always, first, a description of the weather. Then, mention of what Ken he had done. Perhaps word about what she had done. Always a mention of any visitors. A rare variation: happenings in the world beyond the farm. The entry shown here is a good example. Her weather report “Hot as mustard” made me chuckle. Then “California” caught my eye. She had made a note of Nixon’s “fair well” speech, and departu

Here are a few examples from the first weeks of 1966, the earliest year I came upon yesterday:

January 12 – Very cold. 6 above zero at 10 am. Very cold nite. Ken started the tractors. Went to Blackstone for choke for Case. [One of Ken’s tractors was a Case.]

January 17th– Strong wind. Ken couldn’t start the tractor. I did’nt wash. Rita came down for the afternoon. [This was unusual. Grandma always washed on Mondays.]

This entry sent me to Wikipedia. “Cows freshen after a calf’s birth. Speck, Mr. Penfire has told me was so-named because of a speck of white on her brown Jersey cow face.) Freshening occurs when milk production begins….at which point the cow and the calf are separated. So I’m guessing it was the calf that received the bottle from the veterinarian.

As for the final sentence, it turned out that Hedda Hopper (gossip columnist and actress) did indeed die on February 1, 1966.

Clearly, there’s not much going on here, and yet these few lines evoke an entire world…where life is simple, days follow a peaceful rhythm, self-sufficiency is the watchword, and the sky—and the weather it brings—is all-important. 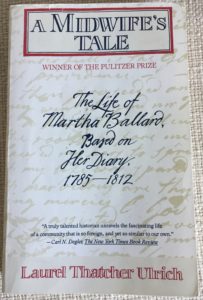 I’m reminded of A Midwife’s Tale. Subtitled The Life of Martha Ballard, Based on Her Diary, 1785-1812,  this book won the Pulitzer Prize because from simple entries not so very different from Grandma Blake’s, an incisive historian was able to extrapolate meaning and present to the reader an in-depth narrative that recreated the daily routines and social history of another era.

From Diary to Book?

I have no such hopes for my ability to wrest insights from Ella Dot Blake’s diaries. And certainly no illusions that any of my lame attempts at diary-keeping could be of any historical significance.

Take 2020 for example. The only entry for entire first month of the year  (I had slept over to babysit the grandchildren–a New Year’s Eve tradition):

The rest of the month I’d recorded just a few notes on what time to pick up and drop off grandchildren at various places.

So here I am yanked back to the question: Why?

Why the heck am I saving my old appointment books and calendars and non-diaries? When will I ever take the time to look back through all these pages? I won’t. But if I did, would investing all that time leave me feeling nostalgic? (maybe) Regretful? (possibly) Enlightened? (unlikely) Happy? (even more unlikely) Or… none of the above? (How about hollow-eyed, tired, and cranky?)

Grandma’s little box of diaries, I’m thinking, are treasures worth keeping. My own bins of old calendars, scribble-filled date books and tediously boring appointment books, not so much. (The journals, maybe.)

So this is what I have to say to the fantasy of keeping a systematic, day-by-day record of my life.  It’s the same thing I said to my childhood fantasy of reading every book in the library:

That ship has sailed. Farewell!